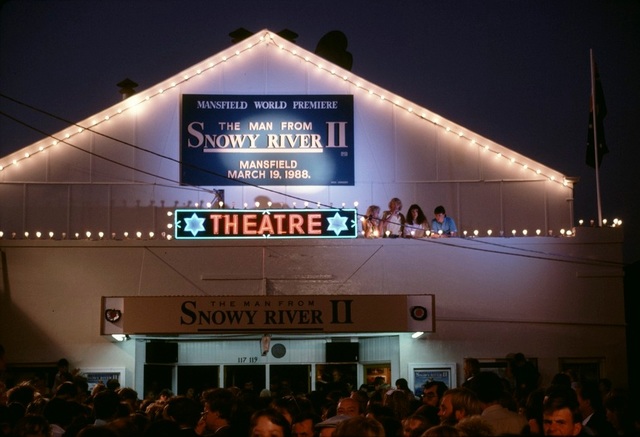 Original country cinema built in 1937. Located in North East Victoria, Australia. The Regent Theatre was opened on 4th September 1937 with Dorothy Lamour in “Jungle Princess” & Cary Grant in “The Wedding Present” Lightweight construction typical of small rural cinemas of the time. Seating was provided for 500, with 388 in the stalls and 112 in the balcony. Privately owned and operated since being built, it screened 2nd-run films. It was re-named Star Theatre in 1949. On 20th March 1982 the World Premiere of Kirk Douglas in “The Man From Snowy River” was held at the Star Theatre. Filmed locally, stars of the film attended the premiere. In April 1995 it was re-named Mansfield Cinema

Sadly, the Mansfield Cinema was closed in May 2007.

This single level country-town cinema was originally called “The Regent”. The brick and cement rendered facade, is backed by an auditorium of wood and fibro construction. It has a reasonable stage area, backed by a “supper-room” which is now used as a 2nd hand shop by the current owners. There is a slight slope to the auditorium floor, with the rear section “stepped up” to form a “lounge” area. The lounge was reseated about 7 years ago with black vinyl seats taken out of the “greater Union cinemas” (former CIVIC Theatre)in Canberra.
The facade of the building was recently (some say unsymaptheticaly) repainted in garrish purple and green colours.

When it opened as The Regent, it traded in opposition to the towns earlier film venue “The Returned Serviceman’s Pictures” which was located in an adjacent street. The RSL Pictures building still survives but is now used as a lodge hall. Its bio box has been removed, but the projection ports, auditorium ceiling, procenium and small entrance foyer are still there. The lodge have built a smaller meeting room as a “shell” inside the old auditorium.

The local high-school has a new multi-purpose stadium seated theatrebuilt within its grounds, and live shows are mostly presented there now. It is to be hoped that movies are kept in their rightful home – the Mansfield Cinema, because it is important that this last vestage of a REAL country picture-show survives.

Listed in the Film Weekly Motion Picture Directory (Australia) 1951-52 edition as the Star Theatre with a seating capacity given as 420.