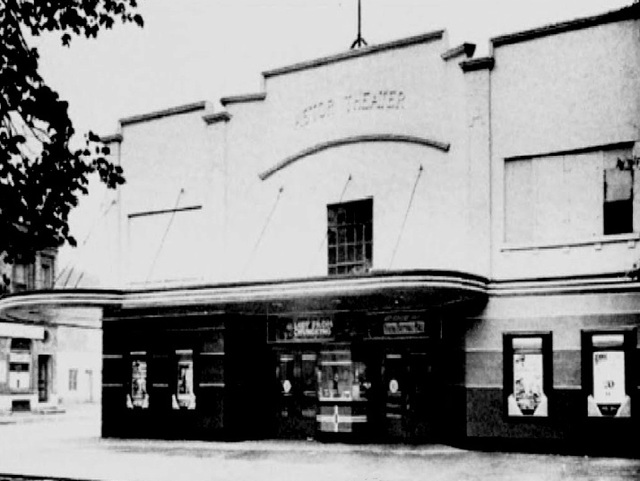 There are a number of theatres in the world named ASTOR, but whether they all hearken to the namesake of John Jacob Astor, as does the one in Milwaukee, is unknown. It is known that this neighborhood vaudeville and photoplays ASTOR was named for the side street on which it is fronted, and that that street was named in 1835 after the famous international furrier of the 19th century. The ASTOR may have had nothing to do with furs, but it did foreshadow a number of improved cinemas on the northeast side of the city when it opened its doors the night of Saturday, January 30, 1915 with a showing of “The Pit in Five Acts” plus a Keystone comedy, and likely some small stage performances, all for ten cents a seat, a more princely sum in those days.

When local architect Hugo V. Miller was asked to devise a theatre (the only one he ever did) he was not envisioning a movie palace, for that format would not occur for another nine years in Milwaukee, but he did make a progressive arrangement of this ‘photoplay parlor’ of some 950 seats in a single level auditorium of a typical box-beams-and-pilasters decor. He arranged for better ventilation than some found in many smaller theatres of its era (air conditioning was still in the future), and a relatively large stage allowed for greater neighborhood vaudeville acts than did other venues. He designed a substantial building of brown brick, but also appreciated the need for a handsome facade to lure the nighttime crowds, and so studded the three bays of the front with staff ornaments and light bulbs including the parapet featuring a center panel reading THE ASTOR, flanked by panels reading VAUDEVILLE and PHOTO PLAYS. The lot was deep enough to allow him to recess the island box office from the sidewalk line, into a tiled vestibule the ceiling of which was blanketed in incandescent bulbs to give the entry a welcoming glow. John Radke was the original owner, but he later sold out to Jack Silliman’s Milwaukee Theatre Circuit, which culminated in the AVALON in 1929. In 1927 Silliman had double level box seats added to the splays flanking the stage and put damask panels between the pilasters of the auditorium. A portal drapery set was placed on the stage and light bulbs within plaster rosettes now graced the intrados of the proscenium arch. There was no practical way to turn it into a movie palace, but the Milwaukee Theatre Circuit did what it could to freshen the old show house.

Comes 1939 and new owner Harry Perlewitz had local architect Myles Belongia (who would really make his name with his last theatre job: the AIRWAY in 1949) redo the facade completely into an Art Deco-Streamlined style so popular at that time. He removed all ornament and light bulbs from the brick facade, and covered the windows in white stucco as was all the brick. On the first story he placed horizontal bands of architectural porcelain steel panels divided horizontally by stainless steel strips, this echoing the new canopy without attraction boards that wrapped completely around the building from its Astor St. facade to its side facade on arterial of Brady St. It was still the ASTOR as the skeleton neon letters on the outward curve of the corner of the canopy made clear, but it was a whole new look; just what changes were made to the interior are not known, but no doubt it included a new, much larger screen with removal of all the old vaudeville appointments, and new, better projection equipment, with no more band in the ‘orchestra’ pit, since by then all films were in sound, unlike the silents with which the place opened. There was never a pipe organ there, so it was a player piano when no musicians were on hand which was customary for only the evening performances at higher prices, anyway.

The ASTOR struggled after the advent of TV and consequent loss of audience, ‘till 1952 when it showed its last movie and sat idle until 1955 when it was transformed into Roa’s Films, a renter and producer of 16mm films to schools, institutions and some citizens. This ironic transformation from a shower of film to a renter of them resulted in the gutting of the theatre, and the installation of a second floor which contained residences for Frank Birch and his wife Roa, the proprietors, along with an apartment for Miss Jean Larsen, another employee of the films vault. They made only minor alterations to the exterior, such as replacing the name of the theatre with their name in the same Art Deco-type neon letters, and adding new windows for the upstairs apartments. In 1963 they purchased the lot to the south of the building and built an addition to allow more storage. By 1979 they were out of business (videos had come on the scene) and the building was boarded up as the entire Brady Street neighborhood was in decline.

Normally neighborhood decline means the death knell for a former theatre, but the ASTOR was fortunate in coming to the attention of James L. Searles, a pharmacist looking for a location for his ideas of a super pharmacy, but with a secret love of films and dramatic production. He was advised against buying such a property, but he persevered as the intrepid character his is, and with his wife Barbara, purchased the derelict building in 1983 and began a monumental transformation into the snazzy pharmacy cum lunch counter/store it is today. Against all odds and even a knife attack by thugs which injured him seriously, he created a neighborhood hot spot still popular with the locals to this day. Not to be denied his interest in the performing arts and his very real efforts to benefit the man on the street, Jim envisioned restoring the facade to its 1915 opening appearance, adding a small cinema in the space created by the addition of 1963, and even adding a performance space upstairs near his residence. After his wife’s tragic death, he found the time and need to refocus himself to attaining his long-delayed wish for the theatrical use of portions of the building, though the facade restoration awaits funding. Using his own funds, and largely foregoing a salary, he succeeded in creating a not-for-profit corporation to make use of the area above the store as the Astor St. Performing Arts Center where he installed acoustical treatments along with 30 feet of mirrors to accompany dancer’s bars for practice sessions. Provisions for a high-tech recording studio were also included, and student filmmakers are encouraged to use the space free of charge.

It was this development that even prompted our erstwhile filmmaker to publish his own monthly newsletter “Filmmakers” to students of drama and film in his area near the University of Wisconsin at Milwaukee campus. The first floor area created by the 1963 addition he had originally used for a groceries sales area, but by 2004 he had converted it into a new, if smaller, version of its antecedent as the new “Astor Theater” with a professional sprung stage suitable for dancing, three rows of seating so far in this 27-foot-square space, and with intentions to add digital projection when it becomes feasible. Such a space separated from a pharmacy and lunch counter by only some louvered doors might seem odd at first thought, but he makes it all work in theme by hanging theatrical and professional motion picture production artifacts all about the large rooms. Spotlights highlight some of the areas, a camera crane fascinates visitors, posters of notable films are everywhere, and even large photos of the interior of the former ASTOR in 1927 take customers to another day and age. Jim may sell drugs, but his only ‘drug’ is the satisfaction of helping the youth of today to see a better world through the unselfish giving of this man of vision. May the ‘new Astor Theatre’, the Astor St. Performing Arts Center, and the Brady St. Pharmacy long continue.

Please let me know of anything you learn of this theatre:

Can anyone help this man dedicated to opening a vintage screenings venue for local college kinds? His registered non-profit “Brady Street Film Center” is a conversion of portions of his Brady Street Pharmacy which prior to 1954 was the ASTOR theatre, a 1912 cinema. If you are ever in Milwaukee, you must stop by the pharmacy on Brady St. at Astor St. and see the unusual transformation! Contact him directly via his E-mail address if you can be of help.

We finally got an occupancy permit. The sound system is operational. The screen frame is up.

We need a small perforated snow white screen – used. We can re-cut to fit our frame – about 10 x 20' Please pass this on. Perhaps some one knows of a theater that is about to come down.

Jim Searles did get the screen he needed from a local source, and so his show goes on, I’m happy to say. ‘Break a leg’ Jim.

According to a June 1, 2006, two page article in the local “Shepherd Express” free tabloid, Jim Searles' new 37-seat cinema cum performance space in his pharmacy is going strong to the delight of local film students and amateur filmmakers. He has dubbed it “The Astor Street Theater” which is a little bit of nostalgia since it is in the building that was once the ASTOR Theatre. Any visitor to the Brady Street Pharmacy’s lunch counter will find himself in the right atmosphere, since Jim has strung stage lights there and together with movie posters and a camera crane from Hollywood, you can almost expect an agent from a film company to jump out and offer you a film contract any moment! The drug store definitely has two faces and it all is a lot of fun.

Photos of this theater are HERE

Glorioso’s Deli and Market has bought the building and will be moving their store from across the street on Brady into the old Astor Theater building. The Brady Steet Pharmacy which had occupied most of the building closed last year and last week the lunch counter and cafe and the 37 seat theater closed.

Glorioso Brothers will open their grocery and deli in the spring of 2010 in the old Brady Street Drugstore/Cafe which operated in the remodeled Astor Theater Building. At present there are no definite plans for the second floor of the old theater which up to 2008 was used as a performing center for theater, dance and films.

Grand opening ad on this page at View link