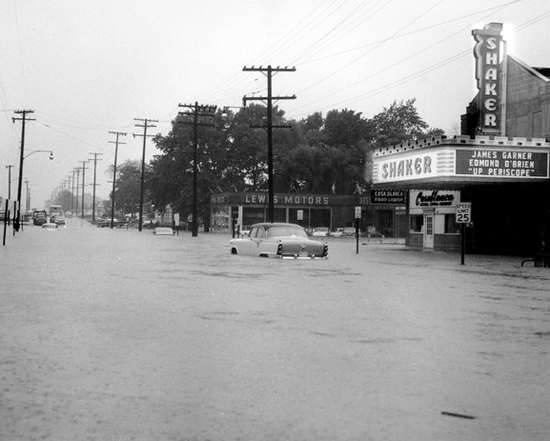 The Shaker Theatre opened in 1936, and closed in the mid-1980’s. The theatre was demolished to make way for Blaushild Chevrolet, which went out of business less than a year after their new showroom opened. A health care center occupies the former auto showroom now.

I remember going to the shaker theatre back in the 1960’s and early 70’s. Everyone called it the “shaker show” back then. I remember the laughing and sad masks that lined the theatre walls, the Pink Panther cartoons, Butch Cassidy and the Sundance kid and the theatre popped, drenched with hot butter popcorn by the bucket. Oh, I can’t forget the snowcaps too. A good time and memories. The Shaker theatre building was demolished and remained an empty lot for a number of years until Blaushields Chevrolet built it’s new showroom in the style of an old train station on the corner of Chagrin Blvd and Lee Road. The Shaker theatre itself faced East and was located on the West side of Lee Road approximately 150 feet from the Southwest corner of Lee Road and Chagrin Blvd. I grew up two streets away from the theatre and rode my bicycle around in their lot as a young child countless times. The theatre never went the X-rated route, due to the regulations of the City of Shaker Heights.

A September 12, 1942, Boxoffice article about the Fairmount Theatre mentions the Shaker as another of the many theaters designed by the Fairmount’s architect, George H. Burrows.

The Shaker opened in 1936, and the November 11 issue of Boxoffice that year published a photo of the auditorium, but the caption misspelled the architect’s name as Burroughs. Boxoffice described the style of the Shaker as “…predominantly Colonial… though with strong modern notes throughout.” The photo bears out the description.

Though the article does not give the Shaker’s seating capacity, the photo reveals a spacious, four-aisle auditorium that clearly would have accommodated well over 1000 patrons.

The Shaker was extensively remodeled in 1954, after suffering damage from a fire in an adjacent cafe that April. The house reopened on July 3. Architect Jack Alan Bialosky designed the remodeling, on which $125,000 was expended.

Boxoffice of September 4, 1954, devoted four pages to an illustrated article about the Shaker Theatre. It was no longer Colonial in style, but featured a casual modernism with many rustic touches such as exposed masonry, planter boxes, and wood with the grain exposed. This style had recently become popular in the west, where it was often called California Modern. It’s a bit surprising to see it in Cleveland.

Architect Bialosky used a more conventional modernism in his remodeling of the Granada Theatre some time later.

Here is a new link to the September 4, 1954, Boxoffice article about the new look at the Shaker Theatre. The subsequent three pages have additional photos of architect Jack Bialosky’s Midcentury Modern makeover of the damaged house.

the movie theatre closed before the mid 80s! In fact it did not just close. If i remeber correctly, it caught on fire and had to be demolished and this had to be in the late 70s, 1980 at the latest. Somebody please verify me on that.

The original look of the Shaker Theatre’s auditorium can be seen in the photo at upper left of this page of Boxoffice, November 14, 1936.

Here is a 1959 photo showing the Shaker Theatre during a major flood on June 1. The name of the movie featured on the marquee is interesting.

Grand opening ad is now in the photo section.

Though I grew up in Garfield Heights, and the Harvard area of Cleveland, my ‘movie oriented’ parents together, and separately, “turned me on” to the Shaker Theater. As a pre-teen I travelled by bus, as a teen/home from college, I drove. I can remember “Dr.Strangelove”, “Tell Them Willie Boy Is Here”, “The Great White Hope” etc….Nice clean place, nice clientele……I also remember,“katty korner” across the street was Mawby’s(?)where originally my mother introduced me to a “Western”, which was a big fat hamburger, mixed with egg and some seasonings, on a nice bun….I believe their fries were good, so too the chocolate milk shake (though any of the Rhoton’s locations had a better shake)…I think my mother especially enjoyed this theater because it was part of ‘Paul Newman’s home turf’….What can I say, them Goy girls were a pushover for the blue eyes…and we also bought sports oriented presents at Newman-Stern, the downtown location near the bridge to the West Side….Cleveland was such a series of ‘tribal villages’ in those days…Jews here, Polaks here, Italians here, Irish here et.al…..Very culturally significant….