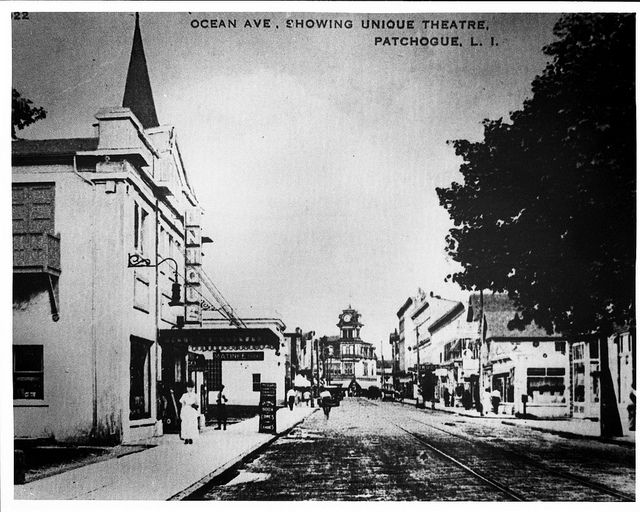 The Rialto Theater, once located on S. Ocean Avenue, began it’s life as the New Unique Theater in 1913. It was the second location for the Unique Theater. It was badly damaged in a fire July 10, 1919. It was rebuilt and reopened in April 1920. By 1925, it had been re-named Rialto Theater, when it was destroyed by a fire in December 1925. The Rialto Theater was soon rebuilt and was operated by the Glynne & Ward circuit and was a very popular theater in it’s day for moviegoers. It became part of the Prudential Circuit chain.

Unfortunately, in the winter of 1978, the Rialto Theater caught fire and it took almost eight hours to fight the fire as the building was completely engulfed in flames. It burned to the ground, and the remains had to be razed afterwards.

I saw all of the “biker” flicks (Peter Fonda/Nancy Sinatra) there in the mid-60’s; also some oddities like “The Horror Chamber of Dr. Faustus”…it sure ran the gamut from A – Z! I remember the owner or manager turning off the movie one Saturday afternoon and telling the kids (us!)we’d have to go home if we didn’t shut up! I don’t remember what film it was. In the winter of ‘78 I was driving through Patchogue and it wasn’t there anymore; someone said it burned down. Made me feel sad. I believe “Sat. Night Fever” was screening there at the time.

Glynn always specialized in large theaters, such as the Southampton, which Newsday always listed as “Glynns” in the movie time table long past the time when he was associated with it. But he also did acquire what is now the Sag Harbor, which is an intimate space. Odd.

RidgewoodKen You had an interesting piece about Sunday performances at the Lyric in Rockville Centre in October, about which Ed Solero and I both commented, now deleted. Is it possible that you could restore it? If I see it there I’ll delete this. Had no other way of contacting you.

The head of the Catholic church in RVC had approached the Lyric theater manager about not having Sunday viewing.

The Rialto, and neighboring Patchogue, were acquired by Prudential in August, 1929. At that time Prudential also operated the Bay Shore, Regent (Bay Shore) and Babylon theaters. The Rialto was immediately closed for renovations and the installation of an RCA sound system.

Approximately a year after he opened the Patchogue Theatre in May, 1913 Mike Glynne acquired the Unique from Nathan Goldstein for a reported $65,000. The theatre was to be named the Rialto and would operate 6 days a week from May to October, Fridays and Saturdays the balance of the year.

Photos uploaded of Rialto fire and building as the Unique.

It must be that the 1920 opening was a reopening, after the house had been rebuilt following a disastrous fire on July 10, 1919, which was reported in that day’s issue of New York City’s The Evening World. The World article said that the fire had started just after midnight, and had burned for several hours, the local firefighters ultimately needing the assistance of brigades from two nearby towns as well as soldiers from Camp Upton to put it out.

This web page has a scan of a four-page program from the Unique Theatre for the week of August 12, 1918.

The pre-fire Unique had an unusual feature, according to this item from the July 7, 1916, issue of The Patchogue Advance (now succeeded by The Long Island Advance):

“The most perfectly ventilated show house on Long Island is the Unique Theatre, with its open roof and large number of electric fans.”