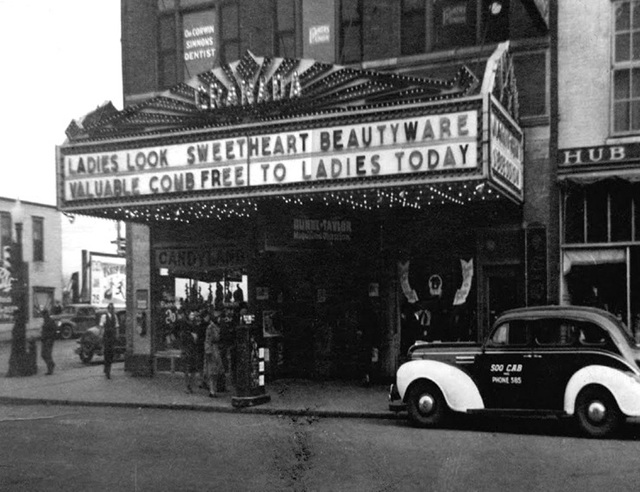 Sharon, I have fond memories of working with your Mom and you and your sister at the Hollywood and with your Mom at the Empire 6. and the pop machine! remember Ray B who camped outside the front door on weekends just to be on hand to restock and keep it running and count the dimes!

Roger I told my Mom about this web site and she told me about the time her and her friend went to see a movie you managed in Luverne MN the show they say was Pink Panther. Do you have any pictures of the theaters? I do have some I got out of a book that was done for Joe Floyd….OH and by the way I never worked in the theaters that was my sister Brenda….I just liked watching the movies…LOL

The Granada was the first theater in Sioux Falls that Joe L Floyd managed. He later built the Hollywood Theater and Kelo radio and Kelo-land TV and he had a Hudson car dealership on the side. In his own words “I’m Joe Floyd and I’m one Helluva Salesman!”
I did manage the Palace Theater in Luverne MN 1974-76. The movie was Return of the Pink Panther that your mother came to see. I think. But then I thought you worked at the Hollywood and it was some time ago.

Sharon. my email is on my profile. Click on my name and send me a message. Would love to see the photos you have. I am working on getting my photos in digital format so they can be posted. Hello to Arlene!!!

Kenneth LeRoy Olson was born in Hale, Wisconsin on August 18, 1922 to Hanna and Almer Olson, one of their seven sons. They moved to Manly in 1929. Kenneth attended school until 1940, and worked at the Manly Creamery and the Lido Theatre after school hours. He married Shirley Marsh on September 1, 1940 in Osage. In 1942, Kenneth and his family, now including their two children Larry and Steve, moved to Sioux Falls, South Dakota, where he managed the Granada Theatre.

Kenneth Olson joined the Marines on December 26, 1943 and left the next day for Camp Pendleton and went into action overseas a year or so later.

“Deeply regret to inform you that your husband, assistant cook Kenneth L. Olson USMCR died 20th February 1945 of wounds received in action at Iwo Jima Volcano Islands, in the performance of his duty and service of his country. The remains were buried at sea. Please accept my heartfelt sympathy.

Still later, his wife received a letter from the Chaplain’s Office of the US Marines stating that “there never was anyone more highly respected and beloved” than Cpl. Olson.

He is listed on the Tablets of the Missing at Honolulu Memorial, Honolulu, Hawaii. He was awarded the Purple Heart.