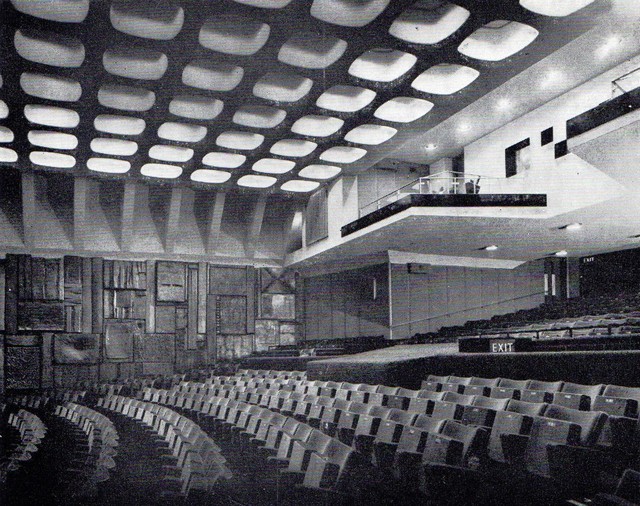 Located in the fashionable Mayfair district of central London’s West End. The Curzon Cinema, replaced the earlier 1934 Curzon Cinema, opening on 6th April 1966 with Bridget Bardot in “Viva Maria” and 542 seats including two private boxes at the rear which each seat 6. It is an elegantly appointed first-class art house. The programming is a fascinating amalgam of current international fare of quality with selected revivals and repertory series.

The Curzon Mayfair is a Grade II Listed building.

Any changes Sadiq Khan makes would not apply retrospectively; however, as the article notes, the installation of soundproofing was included as a condition of granting planning approval of the 2013 application for this development. (I cannot find the planning application on Westminster Council’s website.)

In the previously linked article (http://www.standard.co.uk/news/london/thousands-back-campaign-to-save-mayfair-curzon-from-closure-a3348601.html) Westminster Council says “we imposed a condition that protects the future use of the cinema from complaints by residents by making the developer responsible for installing adequate soundproofing. We are now investigating whether this soundproofing has been properly implemented.”

In the http://www.standard.co.uk/news/london/sadiq-khan-plans-tough-new-rules-for-developers-as-he-wades-into-curzon-cinema-row-a3352481.html article, the developer says “There are a number of outstanding complaints from a number of leaseholders, including existing residents on the third floor, and health and safety issues, and a remedy for volume and vibrations needs to be found.

“Up until now Curzon have simply refused to address the problems which are their responsibility. No changes to the fabric of the cinema have been suggested and no investment has been demanded. Indeed, we have no idea where the earlier reported figure of £500,000 has come from.”

So, from the above, it’s not clear whether the complaints are from leaseholders occupying units pertaining to the 2013 application, and/or otherwise, what type of soundproofing, if any, was installed; and the reference to vibrations suggests that extensive work may be needed; the mere installation of a bit of mineral wool won’t be adequate!

All new dwellings must conform to “Part E” of the Building Regulations (“Resistance to the Passage of Sound”) but AFAIK these would never require sufficient attenuation for movie playback at reference volume levels.

That said, can Curzon not simply apply limiting to all sound channels and possibly turn off the LFE channel, which would not affect dialogue intelligibility?

It turns out that the upper floors are already residential use, with the conversion of the remaining office space on levels 2 and 3 the subject of the above referenced application.

The planning documents do include an environmental noise survey, but this is in relation to external plant-generated noise.

I would hazard a very uneducated guess that specialist acoustic consultants were not involved in this project and the result is now a complex dispute.

Everything must be done to prevent the cinema from being forced to close on account of greedy property companies.

If soundproofing is installed, even if the cost is not bourne by the developer, they may require access to the residential units on the first floor. Whilst they could avoid installing soundproofing by pressuring Curzon into surrendering their lease (i.e. Curzon may just decide they don’t want to face the mounting costs of potential litigation), the risk is that they would end up with very high costs themselves. Which doesn’t sound like a cunning scheme dreamt up by a greedy developer—but, hey, what do I know?

While on holiday in London last week, I went to the Curzon for the first time. Saw Daniel Blake. Good film but my visit was for the auditorium rather than the film. My impression is what I’ve already read in previous comments: one of the last civilized places in London to see a film. I’d be a regular customer if I lived in London. Pleasant cinema with a behaved audience and top notch projection (but why do they open the curtains before the projection starts? — looks nicer when curtains open on the first images). I asked permission to take a few pictures, which I posted here.

Does anyone remember John Silcock. A projectionist here for a few years. I worked with him at the former Plaza Cinema, Regent Street, London.

“Curzon Mayfair cinema saved as developers back off” – City A.M.

HOORAY ! Thanks for posting the info.