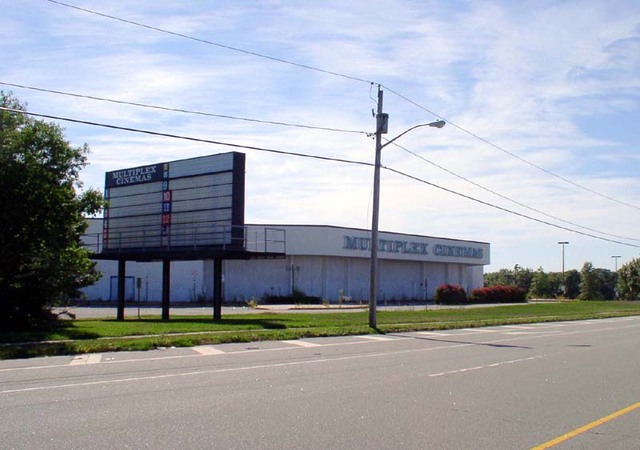 The Brookhaven Multiplex opened in November 1985, and at the time was quite “state of the art”. It is one of the first Multiplexes to come to Suffolk, and is similar in architecture to National Amusement’s Commack Cinemas. It had padded highback and reclining seats.

The Brookhaven Multiplex is probably the final nail in the coffin for some of the smaller downtown small theaters closing, such as the Patchogue Theater and the Plaza Theater in Patchogue (of course Patchogue’s UA Multiplex also was a blow for the smaller theaters). The Brookhaven Multiplex originally opened with 12 screens, but at some point (early 90’s) they cut two of the bigger theaters in half to form a total of 14 screens.

The theater was very well kept at the beginning, but in the late-1990’s and early-2000’s it started to decline a bit.

Finally, it closed in 2003 when National Amusements built it’s new modern facility the Island 16 at LIE exit 62 in Holtsville which replaced the Brookhaven Multiplex at exit 64. The new theater features stadium seating etc, which the Brookhaven did not. At first it was thought that they would keep both theaters open, but they decided to close the Brookhaven.

It’s sort of a shame because the Brookhaven Multiplex only ran for a bit over 15 years, and the building really is in good shape, although the theaters got a little run down by the end, presumable because they knew they were going to replace it.

The building sat vacant for a while, and there was speculation that BJ’s or one of those other type of warehose type stores were interested in the building. It was demolished in 2007.

Someone should open a drive-in theater in that location. I would if I had the money. Someday, drive-in’s will return.

Any theatre on a major highway service road is a plus. It’s almost odd that this one was positioned at a relatively obscure location some twenty years ago and now that there has been major development eastward closed it down in favor of the new one in Holtsville a couple of exits back. When you look at the spotty location of theatres out here any viewing involves a drive of 20 miles (which is one of the reasons I rarely go, even to see pictures I want to see).

ALl what remains of this theater is it’s sign out front. Hard to believe it’s gone, it was such a “state of the art” place when I first saw Rainman there in 1987. Of course, that was before stadium seating became popular.

One of the best jobs I had as a teen. The day before they opened the doors for the 1st time we all watched a midnight showing of Rocky IV

Very sad. It was part of my childhood always coming here. The last movie I saw here was Poolhall Junkies. I actually took a walk to the old site this past Monday via the back entrance which is blocked off by a huge dirt pile and took some pics. Looks awful! Tons of bushes and trees growing all over the parking lot. I didnt go all the way in towards the front where the theater building once stood but I plan on doing so sometime soon

It has been announced that Suffolk Off-Track Betting Corp. will buy the 31 acre tract for $10.95 million on which they will construct a 1,000 electronic slot machine casino. Ground will be broken either in December 2014 or January 2015.

I saw a few days ago that the deal finally got approved and closed! Im happy I visited this site months ago and took pictures and a 14 minute video walking in the parking lot etc. Now to start going back here every now and then to see what progress takes place… It would be nice to see the parking lot and front by service road cleared away from all the weeds and trees that grew after the theater closed down to get a better feel of what the property looked like right after the theater closed down since there are no pictures of that anywhere…….. AND THE MOVIE SIGN STILL STANDS, to which I hope they actually take it down and preserve it and not destroy it!! Its part of history and has lasted all these years after theater closed so it would be a shame for it just to be destroyed after all this.

Maybe they’ll use the pylon for the OTB operation. Interesting note, the former Jerry Lewis in Lake Ronkonkoma, aka Lakeside Cinema, now houses an OTB outlet. And, as far as pylons go, the one for Century’s Whitman is still up despite the fact that the theater has been gone for a long time. Pylon for the Patchogue Multiplex advertises the new housing development coming in; the one for the Skyway Drive In in Greenport the local Lutheran Church; the one for the Rocky Point Drive In is just derelict.

The OTB was ruled out and will now be incorporated in the nearby Marriott on the North Service Road of the expressway.

Question. As I was driving a friend up Route 101, he mentioned that there had been a very short lived movie theater in what is now call the Sunshine Square Shopping Center, at the intersection with Station Road. ????????

The Sunshine Square shopping center was built about 1987, and opened as Sunshine Mall, and I remember it was a farm before that. I am familiar with the shopping center and there was never a theater in there.
When it opened the anchor store was a Finast Supermarket (then Edwards now Stop and Shop). The supermarket was originally where Savers and the Gym are now. Where Stop N Shop is now were just smaller typical stores, which they tore down completely in the middle to make the Stop N Shop. At the other end what is Ruby Tuesday was originally a Fuddruckers Restaurant, and then a few short lived small bars before becoming Ruby Tuesday about 10-15 years ago. The Rite Aide was always a drug store, Genovese before it. The rest of the shopping center were always typical smaller stores as they are now…..no theater.