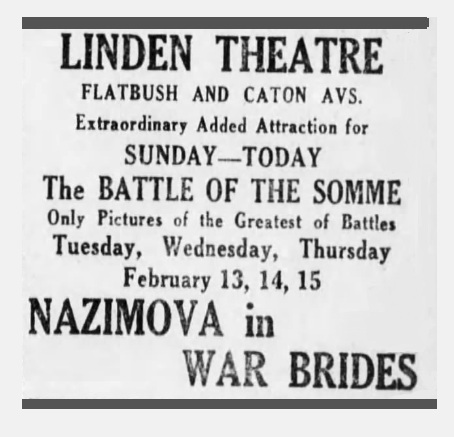 It is not to be confused with the the “new” Linden which was located on Nostrand Avenue several blocks away. The “new” Linden is listed on this site. It was the former Loew’s Century Theatre until 1943 when it became Century’s Linden Theatre. It lasted until 1955.

In photos I have seen, this Linden Theater looks very much like the Ward & Glynne Century Theater nearby on Nostrand Avenue at Parkside Avenue (this street was known as Robinson Ave before 1920’s). It closed in 1930 when the city created a new road by tearing down a couple of buildings on the east side of Flatbush Avenue so Caton Avenue could be through routed across Flatbush Avenue to feed into Linden Boulevard at Bedford Avenue. This was done to facilitate automobile traffic which was hanging up traffic flow by turning right onto Flatbush for one block in order to turn onto Linden Blvd. which began at Flatbush Avenue and was a major artery to Queens and eastern Long Island. The Century on Nostrand later became a Loew’s and about 1943 a Century Circuit house