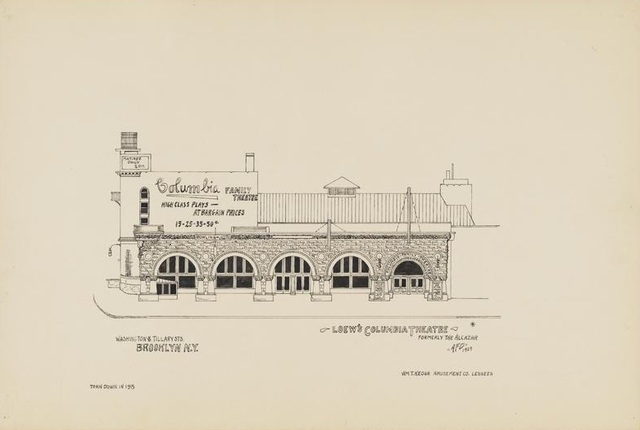 This was a famous downtown Brooklyn theatre at the end of the 19th Century. The Columbia Theatre was located at 275-281 Washington Street at Tillary Street. It opened on March 7, 1892. It was briefly renamed Alcazar Theatre in 1905-1906 when it became a burlesque theatre. Renamed Columbia Theatre, it showed silent films off and on after 1908 and was taken over by Loew’s Inc. in 1909, but was never rigged for sound and closed in 1914.

It was torn down in 1919 to make way for the expansion of the main Brookyn Post Office.

Often there are Photobucket links on Cinematreasures but I don’t seem to be able to access them. What’s the secret?

The 1906 photo linked below of the Alcazar Theater was identified by Erik as another name for the Columbia Theater, introduced circa 1905.
http://www.shorpy.com/node/4342?size=_original

“posted by J.F. Lundy on Aug 30, 2008 at 5:19pm This photo was taken near the corner of Tillary looking south down Washington near the corner bowling alley. On the left is the Washington Street entrance to the Alcazar Theatre, which was just renamed from the Columbia Theatre the year before. See the note near the end of this NY Times article.”

Thanks again Erik for bringing this to my attention !
View link

The full theatre was on the corner of Tillary and Adams. It was eventually demolished around 1930 as the Post Office seen here was extended back. The area was redeveloped later as seen in this 1994 NY Times

There is a Columbia Theatre listed under Brooklyn in the 1897-98 edition of the Julius Cahn Official Theatrical Guide. There are no street addresses in this Guide, unfortunately. The Columbia was run by Daniel Frohman and Al Hayman, and Harry Mann was their Mgr. Ticket prices ranged from 25 cents to $1.50. The seating was 1,728 broken down as: parquette 288, parquette circle 355, dress circle 322, family circle 399, gallery 300, 12 boxes 64. There was both electric and gas illumination. The proscenium opening was 43 feet square, and the stage was 52 feet deep. The auditorium was on the ground floor and there were 10 in the house orchestra.

The address here is not Cadman Plaza WEST. I live right near here and the address is most definitely Cadman Plaza EAST. The photo link to this theatre when the named changed to the Alcazar clearly shows that the photo was taken on the west side of the Street not quite at the corner of Tillary Street looking south to Borough Hall.