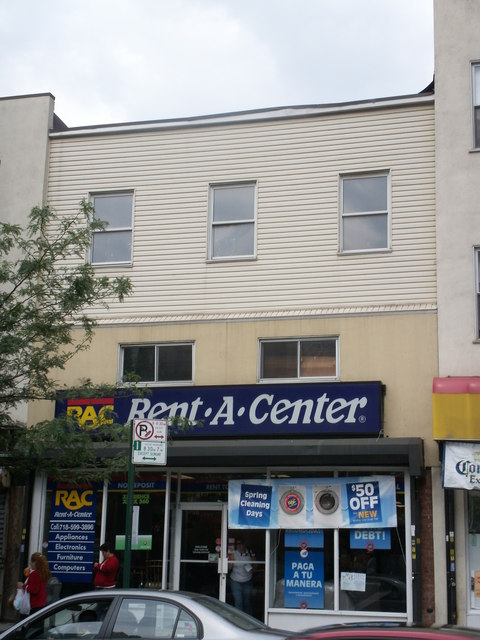 Opened in 1909 as the Variety Theatre It operated until 1917. In 1918 it became the Progress Theatre with 600 seats. From 1933 it became the Lindy Theatre. This neighborhood house that played very late double features. It was closed in 1954.

I have checked out the Rent a Center. It certainly gives the impression of being a theater.

Well, Willburg145, you have a much better imagination than I do … By the way, some interesting comments regarding the Lindy were recently posted on the Graham Theatre page. They are worth a look.

I remember the Lindy well. Locally we called it “The dumps” Not very comfortable seats, only two aisles going down to the screen. Showed really old movies. (late 40s – early 50s)

There is a building at 69 Graham Avenue,formerly Schecter’s Furniture store and it looks like it was a movie theatre. I will try and take a picture and post it.

The December 6, 1913, issue of The Moving Picture World said that a group of Williamsburg exhibitors had met at the Progress Theater, 116 Graham Avenue, on November 20 to establish a branch of the New York City Exhibitors' Association.

I don’t know if the addresses have been shifted since 1913, or if the entrance to the theater actually was once in the other store building that fronts the auditorium. It must have been the same house, in any case.

I don’t know if I can post this here…. Here’s a tax photo of the Lindy.

Thanks Willburg145 for this terrific period photo. hopefully, it will replace the current photo at the top of the page. This picture really gave a picture on how life was on Graham Ave. in 1940.

John, new picture will not replace the old. At best it will be in a rotation schedule.

The photos that show on any given theater is the “most viewed” photo of that theater. So it takes a while for new photos to make it there of course.