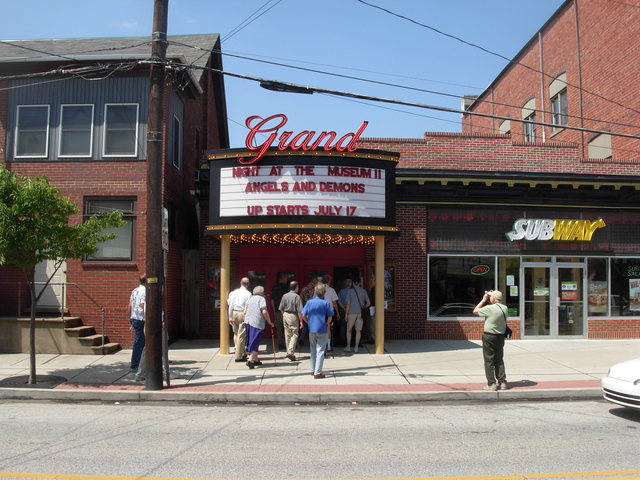 East Greenville is in Philadelphia’s suburban Montgomery County, but in the Upper Perkiomen Valley, which is closer to Allentown than to Norristown.

The Grand Theatre opened October 4, 1924 under ownership of Blank & Fenstermacher. Fenstermacher (whose family owned the theatre until 1970) was the conductor of the East Greenville Orchestra, so there was no pipe organ in his theatre. The Grand featured a six-piece Grand Theatre Orchestra until talkies arrived at the theatre in 1929. The Grand was designed by architect Joseph S. Landes, who designed the Broad Theatre in Souderton, PA. and the Palace Theatre (now a store) in Quakertown, PA.

The name was changed name to Valley Theatre in the 1960’s when interior was ‘updated’ to 1960’s decor. The Valley closed in March 2004. It was uncertain the theatre would survive, as the auditorium ceiling started to collapse because of the need for roof repair. In August 2004, there were new owners who set about to restore the theatre. The auditorium’s original tin ceilings were reproduced, and the wood was restored. In the lobby, more tin was found behind the dropped ceiling.

The theater, now known as the Grand Theater again, has been restored to its 1924 appearance and reopened July 29, 2005. It features first-run movies with Dolby Surround 7.1 sound, classic movies, concerts and other live performances.

This is a fabulous small town movie house. An organ is being installed. Neat marquee too. I drive my kids 50 miles each way to see films as they should be presented.

Nice to read that an organ is being installed in this small town movie house.

Where is Greenville PA? I clicked on the name Jerome Landes and found that he was the architect for the Broad in Souderton PA and the Palace in Quakertown PA.

Grand Theater: The May 1 2007 post doesn’t show any restoration photos and I’d like to see them and perhaps visit the Grand in 2010. BTW, my hometown theatre was also named the Grand.

Does anyone remember a theater in West Chester, PA., that had an Egyptian theme? (This in the same general area as the Grand here under discussion though in Chester County). I went there when I was in college and seem to recall it was rather grand. There were two theaters in West Chester, again as I recall, the second – the Harrison? – was fairly nondescript.

Are you perhaps thinking of the Bala Theater in Bala Cynwyd? Its entry here on CT is at /theaters/9064/
At least some of the links in the comments posted there are functional and will take you to sites with pictures.

There’s a good December, 2009, photo of the Grand’s auditorium in this weblog post by photographer Christopher Elston. There are also a couple of night shots showing the marquee.

January 2, 2021 article about the Grand and other Lehigh Valley theatres.

Greenville is South of Erie PA so will check it out this Spring. Always looking to take a theatre trip.