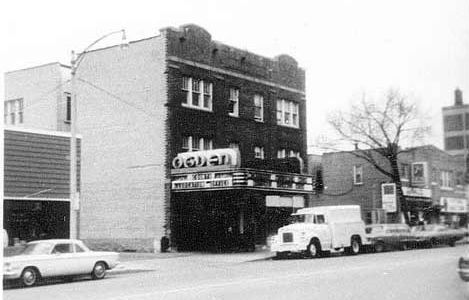 The Ogden Theatre opened in 1926, located on E. Ogden Avenue near Cass Street and closed in the mid-1960’s.

Any additional information would be appreciated…

If Bryan (who I believe to be Bryan Kreft) is going to steel my thunder in listing Milwaukee theatres, I may have to turn over my collection of data to him. But seriously, I did not list most of the hundred or more theatres under a thousand seats, since they were/are not architecturally interesting, as in the case of the 585 seats in the long-gone OGDEN. Incidentally, it was first named the STUDIO for some time, and later named after the street it was on: Ogden Ave. That odd name is the result of naming the street after the first mayor of Chicago, William Butler Ogden, who had real estate speculations in Milw. There never was a pipe organ or anything else of note in the single floor storefront cinema, but the OGDEN met its demise as a result of the city and state planning the path for the Park East Freeway, only a portion of which was ever built, and just now they have demolished that portion, so the OGDEN, like the JACKSON, was razed for what turned out to be no good reason, not that they were thriving enterprises anyway. The only known image of the OGDEN shows a modest, brick building from a distance.

Bryan Krefft would do best to use the lizt published on his web site by the author of MILWAUKEE MOVIE PALACES, Larry Widen, at: http://www.widenonline.com/mmp/list.htm
Though this list does need updating, it is still the best source outside of his 1986 book, which is about to have a sequel.

A Golden Toned Barton Theater Pipe Organ, 2/4, manual/rank, keyboards/set of pipes, was shipped to the Studio/Ogden Theatre from the Barton factory in Oshkosh, Wisconsin in 1925. Know what happened to the organ?