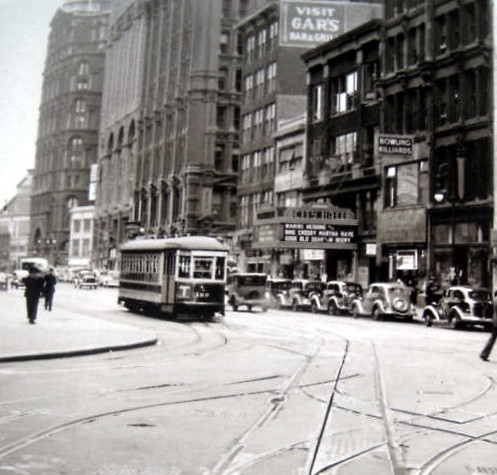 This theatre located at 31-32 Park Row in Manhattan was listed in the 1914-1915 edition of American Motion Picture Directory as the Park Row Theatre. It was remodeled to the plans of architect Louis A. Steinart and reopened September 30 1916 as the City Hall Theatre. It closed around 1946 and was converted into retail use. It was demolished in May 2016.

The July 8, 1915, issue of The New York Times said that the Reliable Investment Company, headed by Joseph Weinstock, had leased the property at 31 Park Row from the Jay Gould estate, and on expiration of the lease of the current tenants (on May 1, 1916) intended to replace the existing building with a moving picture theater.

I’m not sure if the original building, which dated from 1881 or 1882, was ultimately demolished, or was merely remodeled. However, plans for altering the City Hall Theatre building were filed in 1922, according to the February 4 issue of Real Estate Record and Builders' Guide. Architect Louis A. Sheinart was responsible for the plans, which included removing an existing wall, installing a new wall, beams, seats, stairs, and a marquee. A bowling alley was also mentioned as part of the project.

Appears to be a blank marquee. I wouldn’t be surprised if this theater was dark for stretches during the Depression.

Actually, Tinseltoes… I believe that this is a photo of the Tribune Theatre, which was located closer to the Brooklyn Bridge entrance, in a block of buildings that no longer exist.

Ed’s right. The Tribune Theatre was in the white building partly seen about a block to the left of the City Hall Theatre in the photo at the top of this page.

Launched September 30, 1916, the $100,000 City Hall Theatre was the Reliable Theatre Circuit’s attempt to convey Old New York from large interior hand-painted murals and large photos to portray a NYC from bygone days. The rationale was simple: the City Hall was replacing a 2,700 seat class often identified as the city’s first theater and the Ambush Co. delivered the decoration of the space. Louis Steinhart’s frame of brick and steel housed solid copper doors, ornate glass transoms for ventilation, and ivory and gold chandeliers. It was said to be designed as a downtown mini-Strand with just 520 seats.

Patrons enjoyed the Kimball Orchestral Organ prior to showtime and then projection by Powers 6B projectors. David Weinstock was the original manager. Open from 9:30a and last admittance at 11p daily came with a cost – 15 cents, a bit steeper than the 10 cent theaters of its day. Picture at opening in photos.

I am sorry to say that, as I write this, the building that once housed this movie theater is in the process of being demolished. This is part of a big project that affects a number of buildings situated on the east side of Park Row, just south of Beekman Street. I am sure that yet another skyscraper will soon replace this row of five or so story buildings.

During the next few weeks, portions of the theater’s old interior may be briefly viewed as the building is demolished. So, if you have a camera, this may be the time to visit this site.

This will provide an update on the demise of this building. As of today, the buildings situated between the old theater and Beekman Street to the north have been totally leveled. The demolition of the old City Hall Theatre is just beginning. Perhaps some elements of this old theater will briefly be viewable – or not – as it is razed.In any event, this will be the last time to view whatever remains of this theater.

As Mel Allen would say, “going, going, gone”. As of today, absolutely nothing remains of the old theater; it is now little more than an empty lot – that will soon be replaced by yet another high rise building. While I had hoped that some remnant of the theater could re-emerge during the demolition, this was not to be. So, adieu, City Hall Theatre!

I just added two photos, circa 1940, of the City Hall theater, from the NYC Tax Photo collection, digitized and released online in Nov. 2018.

Thanks for the new photos. It is interesting that one of the marques references an extremely early 8:30 AM opening time. This probably highlighted the early hour nature of this theater which, even then, was hardly situated in a residential area. Also, the all male and very business-type nature of the opening day audience also underlines the business and governmental nature of the theater’s clientele.