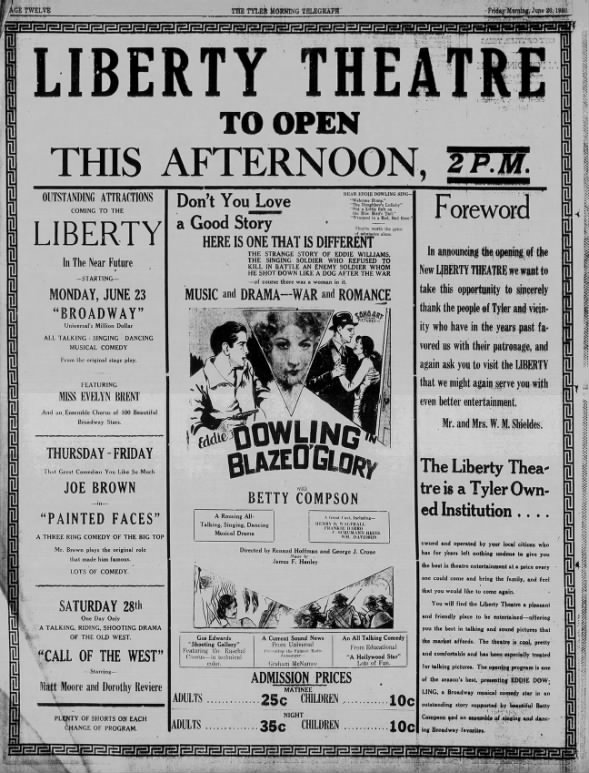 From Tyler a photo of the Liberty Theatre prior to the ugly tile work.

Motion Picture Times of June 24, 1930, said that the new Liberty Theatre at Tyler, Tex., had opened on on June 18. The owners and operators of the house were Mr. and Mrs. William Shieldes. They had earlier operated the Queen Theatre in Tyler, but had sold it to the Dent circuit, which in turn had been bought by Publix. The opening feature at the new Liberty was “Blaze of Glory.”

The May 6, 1944, issue of Boxoffice said that William Shieldes had begun his exhibition career in Tyler in 1919, that he had operated as an independent until 1934, and had joined the Interstate Circuit in 1935. In 1944 he was city manager at Tyler for Interstate.

I have about 100 pictures of the inside of the liberty as i went to TYLER to buy the theater.I did move to Tyler to open another bsns but did not buy this theater.All the pics are on film.

The photos in the above comment section were taken inside the Liberty Theater in 2004.

Several interior Views of the Liberty Theater posted on My Space. The proscenium looks intact but the rest of the theater appears to be a mess as far as structure. Could not connect the pictures with a date. There are two pages worth. Click on each picture to enlarge.

Don, “from personal experience”? Have you visited this theater?

If the town bought the theater to refurbish it, are you telling them to forget it? That would be disappointing for cinema treasures fans to do that, don’t you think?

I received an email from Sam Kidd, Treasurer and Docent of the Smith County Historical Society in Tyler TX. According to Mr. Kidd the city of Tyler Tx recently purchased the Liberty Theatre and is going to refurbish it for use by the East Texas Symphony Orchestra and other events.

the building now is much much nicer on the outside than in 1986!

Nothing has changed .that is the sad part………..

I found this (sad) article on the state of the Liberty theatre and the attempts to turn it into a restaurant of sorts.

The Article was from 2003 so I imagine much has changed since then.

I used to go to this theatre as well as the Tyler and Arcadia in the mid 1950s, mostly on Saturdays. I was given a dollar and could spend the whole day at the three theatres in downtown Tyler. The Liberty showed a lot of the American International double bill horror films. They occasionally had a blockbuster and some of the MGM musicals as well. I saw C. B. DeMille’s “The Ten Commandments” there.

The last film I saw at the Liberty was MGM’s “Les Girls” in 1958 before we moved to Corsicana Texas. The Liberty had the best popcorn. I could smell it outside of the theatre as I walked up to buy a ticket.

THEATER HAS BEEN SOLD!

My photo of the LIBERTY View link

still waiting for someone to save her///////

2004 picture of the LIBERTY in 2004 @ www.vanishingmovietheaters.net