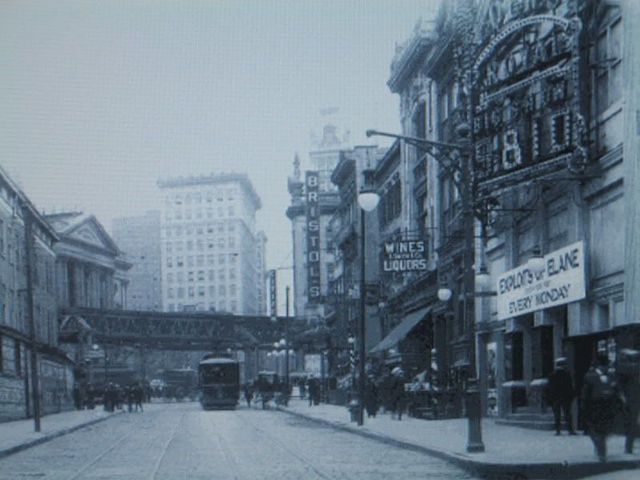 The Royal Theatre was the very first Loew’s theatre in Brooklyn and one of the circuit’s earliest anywhere. It started life in 1903 as Watson’s Cozy Corner, which included a vaudeville theatre and a downstairs drinking saloon. It rapidly deteriorated into a notorious burlesque house and place for gents to meet hookers.

In 1907, Marcus Loew wanted to expand into Brooklyn and found the Cozy Corner’s downtown location ideal for his purposes. He purchased it cheaply, renovated the interior, increased the seating capcity to about 2,000 seats, and re-named it the Royal Theatre. Because of the site’s bad reputation, Loew feared that “nice people” might stay away, so he first leased the theatre to an Italian opera company for a short season. It opened in October, 1907, as Teatro Italiano Royal, featuring a company of 25 under the management of Antonio Maiori. In those three months, the theatre became regarded as classy and respectable.

In January, 1908, it emerged as Loew’s Royal Theatre, with so-called “family vaudeville” and movies at a ten-cent admission. In its first year, the Royal Theatre earned $60,000 in profits and helped Marcus Loew to expand rapidly in Brooklyn.

In 1922, Loew’s Royal Theatre had out-lived its usefulness and was closed forever, eventually to be demolished.

According to Emily Leider in her re For what it’s worth, my grandally good “Becoming Mae West” (Farrar Straus Giroux,1997), “Baby Mae” mad eher debut at the age of seven (1900) at “The Royal, on Willoughby Street, near Fulton” (p. 32). Leider goes on to describe it: “The theater … was no great shakes, though large. It seated about seven hundred people. One vaudevillian characterized it as a ‘dingy spot,’ but Mae upgraded it in her fond recollection to a well-appointed house with two balconiues, boxes, and its own twelve-piece orchestra” (pp. 32-33). Leider’s source is John E. Di Meglio, “Vaudeville USA” (Bowling Green Univ Press, 1973), p. 132. For what it’s worth, my maternal grandfather claimed to have worked with La West in Coney Island before WW I (he bartended at a cabaret there). Another frienend of mine interviewed La West in the 1970s — and claimed she was the real thing!

Leider also points out that in ‘28 “Diamond Lil” opened at the Royale Theater on W. 45 Street. MW likely had a penchant for theaters of that name. (Apologies for my typos in the preceding squib.)

Mae herself again mention the Royal in the new Charlotte Chandler interview-type bio of Mae: “She Always Knew How.” Mae also mentions the Gorham. Anyone know about that one ?

Nice picture I love LOEWS old signs.Too bad that they don,t make them like that anymore!!!!