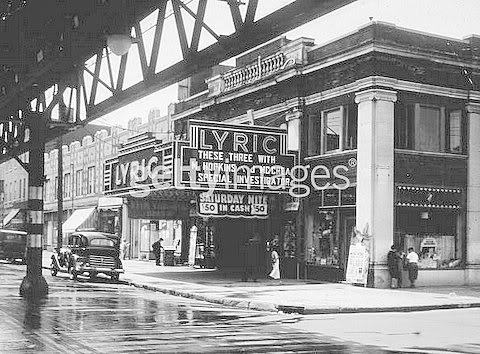 This was a small neighborhood theater located in the East New York section of Brooklyn. The Hendrix Theatre was opened in 1915. The 500-seat theatre also had an 800-seat open-air roof theatre. In 1935, it was renamed Lyric Theatre, and was closed in 1952.

It was converted into factory use, with some storage and office use. It has now been demolished.

Brooklyn Jim asked me to post this photo….I hope this is the right Lyric Theater….

According to “Nickelodeon Theatres and Their Music”, page 143, the Lyric in Brooklyn had a large Wurlitzer photoplayer circa 1914. From the tiny photo it looks like a model H or K.

I can confirm Warren’s picture is the Lyric Theater that was
located at 2245 Pitkin Avenue off Hendrix Street. I don’t have a
closing date but a CO was issued for a factory at this location in
1954.

This was one of the two small theaters I first attended alone as a child around 1950-52(the other was the Miller on Sutter Avenue), as I lived within two blocks of both of them. I remember the admission for children was 12 cents for weekday matinees and 20 cents on weekends. Interestingly, the manager told my father that he needed to do about $200 per day to make ends meet, and that he was having problems doing that. TV, of course, was already becoming popular in NY by then. Since I left the neighborhood in late 1952, I have no idea how long the Lyric(or the Miller) lasted.

I think the street view clearly shows that this theater has been demolished. The view evidences a vacant lot at the northwest corner of Pitkin Avenue and Hendrix Street, where the Lyric once stood. A status update is in order.