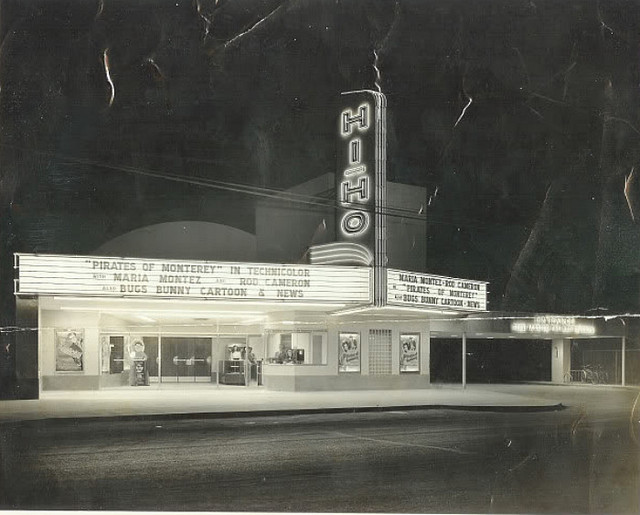 Built in the Quonset Hut style like many others that went up quickly in the 1940’s. The Hi-Ho Theatre was opened on September 25, 1947 with Claire Trevor in “Batchelor’s Daughters”. Located on the corner of E. Southcross Boulevard and S. Presa Street. It was lined with glass panels along the front of the theatre looking into the lobby. It had a marquee that stretched from one side of the building to the other above the front of the building. The box office and entrance was located right side of the building. Two side aisles led into the auditorium which seated 682.

The Hi-Ho Theater building is actually just off the corner of Linda Lou and South Presa, about 800 feet north of Southcross (which was Darchy Road) during the theater’s operation. The stagehouse and marquee are still identifiable. The building is used for storage by an adjacent business.

The Hi-Ho’s owners lived in an apartment upstairs in the theatre. The theatre did fair business at first, but television really hurt the theatre in the late 40s and early 50s. It was set up to run 3-D movies, but that never took off, and the only types of films that brought in any kind of crowd were risque movies. The Archdicese of San Antonio called for a boycott of the Hi-Ho, and that finally did it in. The Hi-Ho was so named because it was between the Highlands and Hot Wells neighborhoods. The Hi-Ho had a sister theatre in Mathis, Texas called the IT.

The web site Lost Memory linked to above says that Gordon Smith designed this theater. Smith was a partner in the firm of Smith, Pitts & MacPherson, with DeHaven Pitts and Charles T. MacPherson. The slightly earlier It Theatre in Mathis, Texas, another quonset-type house, is attributed to DeHaven Pitts.