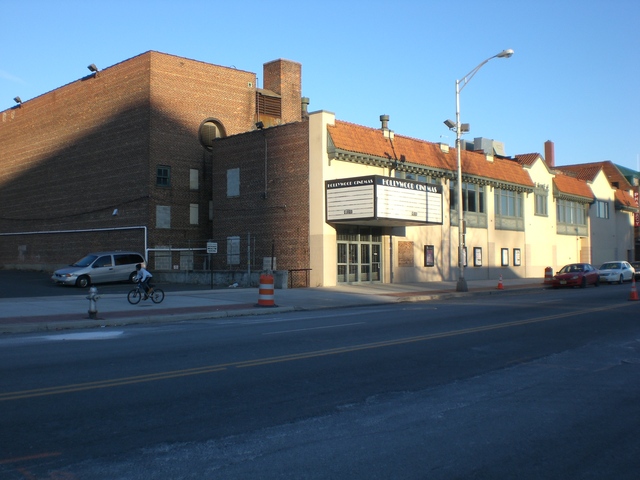 I don’t remember much about this theatre. By 1941 the Hollywood Theatre was operated by Warner Bros. Circuit Management Corp. In the 1970’s I was visiting a great aunt in West Orange, and my family went into downtown Orange to see “The Man Who Would be King” at this theatre.

The outside had a Spanish style facade, and all I remember about the interior was the glass partition at the rear of the orchestra section. It was held together with nicely detailed brass posts, and was obviously there as a remnant of the days when the theatre would be sold out to “standing room only”.

The Hollywood Theatre was gutted and transformed into a five-screen movie house, the Hollywood Cinemas, which opened in August 2005.

The Hollywood Cinemas were suddenly closed in September 2007.

The closing of the Hollywood is truly a pity. Although the marquee was plain and small, it lit up that corner on Central Ave. and served to welcome shoppers and moviegoers alike to a still elegant block, reminiscent of its past glory. Community leaders should work with the owners to find a way to continue the Hollywood as a movie venue. Trekking to the sterile AMC Essex Green is a poor alternative.

As a lifelong resident of the East Orange area, I had long hoped the vacant Hollywood would reopen. When this finally happened I avoided the first day thinking it wouldbe jammed. Imagine the surprise when I found myself virtually empty when I visited to see King Kong.

Over the next two years, it wouldn’t surprise me if I was the new theater’s most loyal customer. Sadly, through that time, the Hollywood was seldom crowded. Many times, I had private screenings of major hit films. The only true success was the early opening of Dremgirls last year, which did draw good crowds.

Why did it fail? In my opinion, if the same number of people who attended the old theater in the 80s were still here, it would have been okay. I just think there are not as many moviegoers within walking distance as in the past. Others want to go out of town for the change of venue.

It seems ownership had not formed any alliances with local business to promote themselves through store posters or flyers.

Perhaps, instead of 5 screens, they should have started with 3 until demand justified.

Finally, the Hollywood should have opened with a bang. Perhaps a block party with local radio djs, music and a celebrity guest or two, and I don’t mean the mayor.

The closing is a bitter pill for me and I hope the owners reconsider and give it another shot before gutting the building.

To Whom It May Concern:

We are very interested in the possible purchase of the Cinema located on Central Avenue, East Orange, NJ – Hollywood Cinema to be exact.

We would like to have a walk-thru of the property.

in the 70s i was one of the projectionist at this theater i also worked at the Verona and the ormont,and the royal theater. those were the days.I remember showing mahogany with diane ross at the hollywood,and i ran the GODFATHER AT THE ROYLE THEATER IN BLOOMFIELD.there WAS ALSO A GENERAL CINEMA THEATER NOT TO FAR FROM THE HOLLYWOOD IF I REMEMBER.WELL THATS ALL I CAN SHARE WITH YOU FOR NOW ANY QUESTIONS PLEASE ASK.
THX
JOE MATTEO

The General Cinema you speak of was likely Essex Green (West Orange). I knew it in the 90’s as a triplex. That theater closed and reopened as part of the shopping center in 1997 as a new generation of General Cinema with stadium seating and a cafe. It’s still open and running as an AMC.

I’m guessing Clearview’s 5 screens at SOPAC, as tiny and strangely designed as they are didn’t help the Hollywood either. Essex Green, last I was there is still a popular and well run venue that must have a future if AMC is putting in digital projectors.

My only memory of going to see a movie in East Orange was when my Mom and I ventured on the NJ Transit train from Dover.I loved horror movies and the RKO Hollywood was showing “Night Of The Zombies” in late 1983 which theaters in my area passed on.It was an eye opener for my Mom as things had really changed since the days when she worked at Paris In The Sky.My brother had mentioned that Mom had gone to the beautiful Ormont Theater in town back in the day.It was an adventure and unfortunately we were walking so we didn’t get a chance to see the whole city and it would have been a wonderful time for memories to come back and reminisce on.Mom passed away back in 2000 and I miss her and the talks we used to have.These things,like classic ornate theaters are irreplaceable.

ianz hello nice to hear from you i use to be the projectionist at the ormont and the Hollywood working as a union projectionist i went to many theaters.the Ormont was a converted masonic temple the theater had the first 3 floors.i had to go out the fire escape to get into the projection room it was very small.glad you had your mom to visit some of the old neighborhood i still have many great memories of that time i worked there around 1971-73 peace my friend see ya at the movies ! :)

jojo, nice to hear about old union guys from the good old days. Although I am only 54, and have been a projectionist for the past 37 years, I enjoy reading about the days when my father was involved. I joined local 379, Perth Amboy, later 534, and most recently we merged with 21 in Newark. I am in my final days as a projectionist due to all the digital conversions. Its on to stagehand work for me. I will still get occasional reel to reel work at the Count Basie Theatre in Red Bank. Some of the more notable theatres I worked at were the Menlo Park Twin, Woodbridge Twin, Sayrewoods Theatre, Amboys Multiplex, Old Rahway Theatee, Linden Theatre and the Ritz in Elizabeth. Good old days indeed.

jojo, yes I am. Mark Pus…. should be enough for you to find me. My profile picture is of me threading a projector, mostly upper magazine. I see the paramount and the adams and proctors in Newark when I work at the new arena.