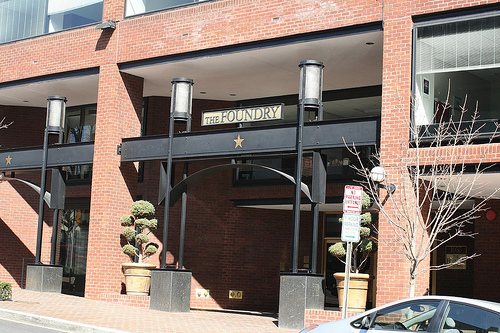 Located in the Foundry building on Thomas Jefferson Street, this seven-screen multiplex opened in 1984 as part of the K-B Theatres chain. In the 1990’s, it was taken over by Cineplex Odeon. The theater closed in 2002.

When I lived in DC in the mid 90s these were booked primarily as second run discount theatres…A reasonable if not overly comfortable place to catch up on The Madness of King George, Get Shorty, Braveheart, Goldeneye and Mrs. Parker and the Roundtable…The sad part is that with the Key and the Biograph gone DC’s college community around Georgetown is left with just a new megaplex

Absolutely nothing remains of the Foundry Cinemas. Retail space in this very high end community does not sit vacant for long.

KB went out of business on March 7th, 1994 (ended up with Cineplex Odeon)

“When the owners of KB Cinemas shut down the projectors and abruptly closed their Washington area theater chain almost two months ago, they left about 90 employees in the dark.

Some employees say they showed up for work the afternoon of Jan. 18 and were told the theaters were closing. Three days later, they said a KB corporate manager told them they no longer had jobs and wouldn’t get paid for their last three weeks of work. They say they also have not received W-2 forms, which are necessary for filing income tax returns.

Since then the employees say they have tried to locate the owners or the chain’s top executives, but that KB’s corporate office in Chevy Chase has been cleaned out and phones calls are not being answered."

The Foundry 7 Cinemas was designed for K-B Theatres by architect James Thomas Martino.

The Foundry’s cinemas were in two locations in the building: one with four screens, the other with three. The largest screen in the set of four was oddly shaped, with a peculiar elevated section on the far right.

Jack Coursey, the spaces vacated by the theatres DID remain vacant for quite a few years. The Foundry mall is a bit off the M Street “beaten path,” down a dark street and over a spooky canal. From my observations it doesn’t get as much foot traffic.

When Cineplex Odeon was negotiating with KBs creditors to take over the vacated theatres we were given 15 minutes to walk through the Foundry. To say it was trashed is an understatement. Once an agreement was reached it took several days to get it into operating condition. Parking was always an issue.