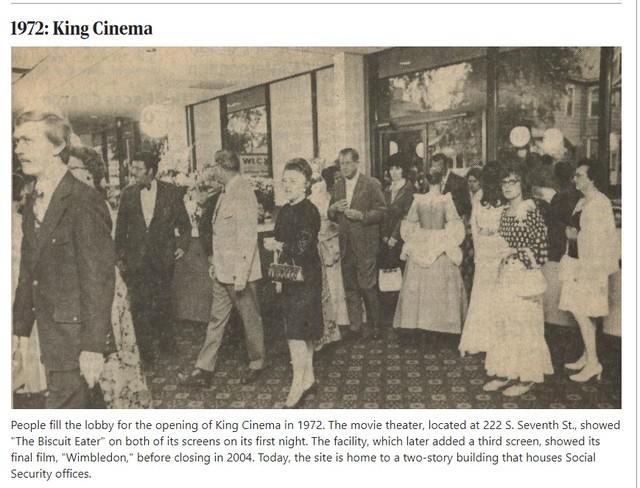 Opened on August 22, 1972 as a planned twin theatre originally intended for the Jerry Lewis chain. It showed first run features. It was operated by Marcus Theatres from 1984. On April 17, 1987 the largest screen was divided into two screens and it operated as a triple screen until it closed in 2004. The theater has been demolished since then.

A shamne really, but towards the end, it was showing second-run films, and just couldn’t compete with either of the big multiplex theaters in La Crosse. I will always have fond memories of the old King Theaters though, as that was where my parents took me to see this new film that was out, that everyone was talking about.. “Star Wars.” Also, in 1970’s, we never had much money, but we managed to go see movies there back when they had $.99 movies. We all shared a popcorn and soda..

In later years, I lived in an apartment builing just down the street from the King while I was in College. The building is still there, on the corner of Seventh and Cass, and is the same unfortunate shade of green. In the summer time, the smell of fresh popcorn emanating from the King Theater would be nearly overwhelming.

Here is an article about the closing from the local paper:
http://tinyurl.com/ektdh

Alas, the King Theater is simply a vacant lot at this point. There is nothing to remind one of the theater that once occupied the spot.

A federal government building now occupies this spot. A lovely building but still hard to replace the memories.

<<< “I will always have fond memories of the old King Theaters though, as that was where my parents took me to see this new film that was out, that everyone was talking about…‘Star Wars.’ ” >>>

The La Crosse first-run engagement of “Star Wars” was actually at the Plitt Hollywood, not at the King. Perhaps it was during one of the film’s numerous re-issues that you saw it at the King?

David is correct. Th King theatre was originally going to be a Jerry Lewis Cinema, but money became a problem and Marvin Mann of Cinemaland Theatres in Minneapolis purchased the Theatre managed by Dick Lepsch. The King was originally a twin theatre.

This opened on August 22nd, 1972 (a day before the Marcus Cinemas opened) as a twin cinema and taken over by Marcus in 1984. The largest cinema was split into two creating three screens opening on April 17th, 1987 and closed in 2004. 1972 grand opening ad posted.