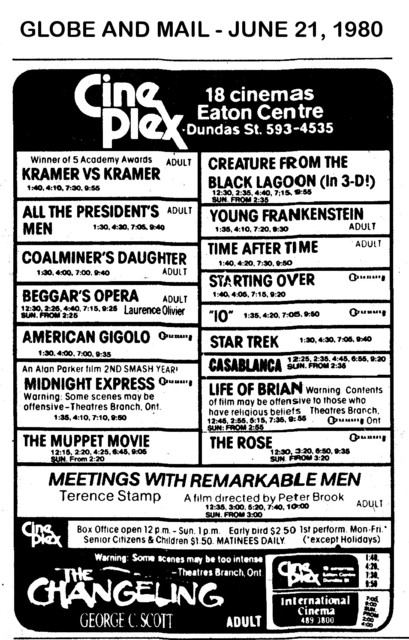 Opened in 1979, the 18-screen complex was once cited in the Guinness Book of World Records and was an enormously popular venue for years. By no means a true Cinema Treasure, this theater once contained the world’s largest number of theaters in one multiplex, a forerunner of today’s megaplexes.

As the 1980’s and 1990’s wore on, however, the theater’s small screens began to fall out of favor with audiences and the multiplex was converted into a second-run house.

Unable to turn a profit, the theater finally closed in March 2001, a victim of Loews' policy of retraction. It was demolished a few weeks after closing. Local moviegoers are not completely left in the dark, however, as the AMC Yonge & Dundas 24 opened nearby.

Since the AMC opened it’s turned into my favorite movie house in Toronto. Classy looking, no pre-show commercials, great seats and excellent 4K digital projection in all of its 24 auditoriums. Sure beats the pants off both the long-gone Eaton Centre cinemas as well as the Scotiabank.

Mine too Jon. Much classier than all the others, and a great location too!

I like all the AMC “multiplex” theatres in the Toronto area. They are comfortable, have all the amenities and are not noisy, garish with that carnival atmosphere that the others have, especially the former Famous Players locations.

To say I hated working this theatre (as a projectionist) would be the understatement of the Century (or Simplex or Cinemeccanica). This was the single most wretched job an operator could get assigned to in the Toronto Local in the 80s and 90s, in my opinion. It was originally 16mm only and ran with non-union operators. King Garth then put in 35mm equipment in throughout. The problem is, many of these abominations masquerading as auditoria were equipped with rear-screen projection equipment, a cobbled-together mini-platter system or MUTT arrangement, and three front-surface mirrors. Did I mention the projectors sat on the floor? Did I mention the rats and mice in the booth?

There were three sections (six regular ops). Front section on the main floor and the three downstairs booths, back-half main floor and second floor. Number 5 was retrofitted with a Cinemeccanica Vic-X (the second machine out of the Humber downstairs when they put a platter in there). Number 5’s booth and the downstairs corridor for 15-16-17 were not bad. When I heard it closed I so wanted to ride a bulldozer through the lobby and personally tear the place to rubble.

The rats and mice part sounds scary. That alone would make me want to quit my position.

And it turns out, this theatre really was intended to be an arthouse. In its early years, the theatre ran art films and revivals as well as second-run fare. Also, there was a bistro and art gallery nearby (an idea that later showed up in other Cineplex theatre) which also inforced the whole art intention.

More interesting things I found were that Midnight Express and Life Of Brian both played for over a year in second run.

And what is even more interesting is that although the shopping complex is still called Eaton Centre, Eaton’s is no more. Now it’s Sears.

This was not the first theatre called Cineplex. See http://cinematreasures.org/theaters/27493

They could have built an 14 screen Theatre in its place