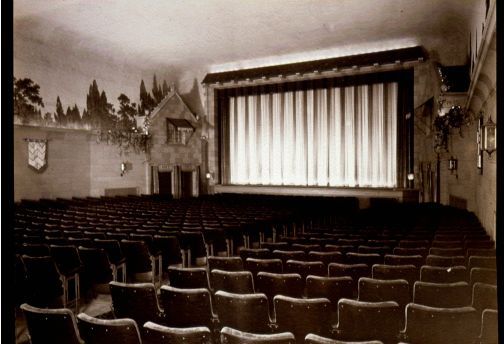 The Capitol Theatre was Canada’s first theater built for sound movies. It opened on 15th August 1930 and had an original seating capacity of 684. It was designed in a medieval Norman castle theme in an Atmospheric style by architect Murray Brown.

After closing as a movie theatre and laying empty for a period of time, a renovation project began in 1993. This was completed and theatre is now open for live performances and film festivals.

I first discovered this theatre in very early August 2004 but the theatre was dark the day I passed through Port Hope. After arriving home, I checked Cinema Treasures to see if the Capitol had been written up and then went to the website link above. I was impressed and decided to return to the Capitol on August 22, 2004 to see a live performance of Agatha Christie’s “Ten Little Indians”. What a lovely little theatre this is and yes, they still show movies. I plan to return soon for a movie. One reason why the Capitol is successful is because like many of these rescued theatres, the Capitol has an “army” of unpaid volunteers.
Today the Capitol seats 361 which appears to be down considerably from its original seating capacity. Newer seating (although they’re still not real wide) and fewer rows as well as a stage in front of the proscenium arch has diminished the seating capacity. Yes, they have a working cloud machine but don’t always use it because they’re worried about replacement parts and are trying to make it last as long as possible.
During October 22nd to 24th, the Capitol is holding a three day vintage film festival, please check out their website above for details. I was informed during the winter months they book films that were shown at the Toronto film festival.

The Capitol Theatre in Port Hope opened on August 15, 1930, in a former fish shop, with the auditorium section occupying what used to be a livery. It was the first theatre in the country built specifically for talking pictures.
The Capitol operated as a cinema for 57 years, finally closing in 1987. The Capitol Theatre Heritage Foundation eventually bought the building, and in 1993 began a process of restoration.
It is now used to showcase both performing arts and films.

This theatre was in the movie “Tommy Boy.” The vertical marquee was shown twice. Upon checking IMDB, I saw all the shooting locations and cross referenced the other main location besides Canada; Sandusky, Ohio. It was this one.

The Capitol Theatre in Port Hope was a purpose built movie theatre in the atmospheric style built by Famous Players Canadian Corporation. After a number of years Famous Players allowed one of their partners Premier Operating to take this over, as it probably wasn’t doing typical Famous Players business!!

I went to this theatre a lot as a kid and I’m starting a blog about movies. I’d like to get permission to use this photo on my blog. Can anyone help me out with that? Thanks.

Ok …. I will admit it….“IT” brought me here,Looks like a beauty.I would love to visit this one someday !

Film festivals should be added to Functions. The website lists a vintage film festival with 12 classic movies to be screened.