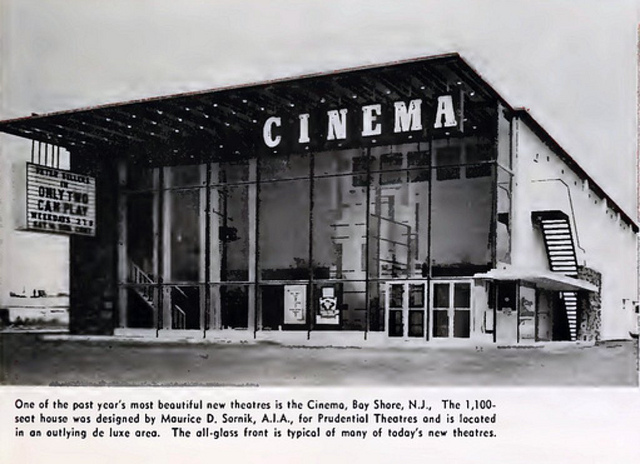 This single screen theatre stood on the outside of the Bay Shore Drive-In. Not to be confused with the indoor screen that was within the drive-in property.

Could someone who has seen this theater take a look at the picture on the cover of Boxoffice Magazine for January 7, 1963, and tell me if the 1962 Maurice Sornik-designed house for Prudential Theatres it depicts is the Bay Shore Cinema in New York? The caption says that it is in Bay Shore, New Jersey, but I’ve been unable to find any confirmation that the New Jersey town ever had a theater called the Cinema. I think the caption writer might have made a mistake.

Joe V., would have liked to see that cover for Boxoffice Magazine. I guess you took it down?

Took my then 12-year old brother here back in the late summer of 1985 to see the decidedly R-rated “Return of the Living Dead.” Not sure what I was thinking! He seemed to perk-up when a girl in the film did a striptease number in the middle of a graveyard! Ah the classic B cinema of the 1980’s!

There was originally a plan to have multiple theatres on the site and called Cinema City. Then the bottom dropped out of the movie business.

Hmmm…for a long while the picture that Joe Vogel linked to in his post on 11/10/09 was posted here. Now it’s gone and the link is also not working. I wonder if there’s a connection. Hope the picture is not gone forever because I haven’t been able to find any others of the Cinema.

I don’t know why the link would have disappeared, but uploading the photo to CT may have been in some sort of copyright violation.

I saw"For Your eyes Only"at the in door,at the out door I saw “The Odd Couple”.The minister Robert Shuyler had made one of these into a church in California.

Uploaded a set of pictures of the interior of the Cinema in 1989, as well as one of the demolition in 1991.

Growing up in West Islip I would often wonder about this theater as its architecture would catch my eye whenever I was driven past by my parents along Sunrise Highway. I’d wonder why there was a drive-in behind it on what felt like almost the same property and if the two were related even though they seemed to have separate vibes. (Thanks to Cinema Treasures I now see they were mostly different entities.)

I never got to visit the drive-in as my mother warned me that such places are “passion pits” where people are not there to watch what is on the screen and what I might witness happening off screen would disturb me.

The only time I was at the Bay Shore Cinema was my first time sort of seeing “The Rocky Horror Picture Show”.

In about 1986 I somehow got invited by the “cool kids”, who in my high school at the time seemed centered around the Drama Club and their friends, even though I wasn’t in their social clique, (or anyone’s, perhaps being more of a thinker than a socializer, though I had some individual friendships). Probably that was a semester when I wanted the experience of being on the club’s backstage crew, during which I may have overheard them talking about “Rocky Horror” and tried to ask what it is. When they found out I had never been they looked at me with an expression of “Oh, this is gonna be fun”.

When the time came I got sandwiched into the back seat of one of two cars full of kids piloted by those who could drive. On the way they were still evasive about what the show really is, with some explaining to the others that I am asking questions because I am a “virgin”, as if I had gotten myself involved in some sort of initiation.

At the theatre we took a back row as the middle was full and the show was starting. A few minutes in I still couldn’t hear the dialogue because people kept yelling things at the screen or singing and dancing along with the music depending on the movie’s scene as if the audience was part of the show and everyone knew what to do and when.

After awhile I decided to move to an aisle seat in the front rows closer to the speakers where no one else was sitting while also thinking it would be safer to stay away from whatever my classmates implied they may have planned for me — but then a guy costumed like a cross-dressing exotic dancer from somebody’s artsy bad dream emerged from somewhere below the screen and sauntered over to my area! The crowd cheered and a moment later he was mimicking the actions and lip syncing the lines of an actor who had just appeared in the film that, whoa, looked a lot like him!

I then gathered from a song that seemed to introduce the character that this is “Frank-n-Furter”, even though he didn’t seem to be a hotdog vendor. Rather, he proclaimed himself to be a “sweet transvestite“!! (Doesn’t this sort of thing only happen at the drive-in I was warned about??! Is that where he wandered in from??! Selling frankfurters at the concession stand??!)

At some point he focused on me, seductively stretching his garter belt and pointing to it. I wasn’t sure what was going on and shook my head “No“. (What character did he think I was portraying??) The crowd chanted “Virgin! Virgin!” at me as he tried a couple more times. I shrugged and someone yelled “Tip him!” I turned to the audience and said “What? What does he want me to do?!” Other voices shouted “He wants money!” and “Give him a dollar!”

I turned back to him and he was slowly nodding in agreement, his eyes fixed on me and holding a space open between his garter belt and thigh skin for my deposit. I figured if I complied maybe the situation would end so I relented and placed a buck or three in the space provided. He mouthed a “thank you” as the crowd cheered. The Frank-n-Furter on the screen had already left the scene and this live one made some last flamboyant gestures to the audience before receding back from whence he came.

Some minutes later I left to use the restroom then didn’t want to go back in since stuff was still being yelled at the screen, I didn’t know what might happen to me next, and besides I hadn‘t followed the “story“. I hung around the lobby talking a little with the staff who assured me all their performances of “Rocky Horror“ are like this. I attempted to take a nap on some furniture, though the employees may have thought it would be more “fun” for me to return to the auditorium. To pass more time I may have used a payphone there to call my parents who were waiting up for me who advised that I wait till the movie was over for the ride home from the group.

After the film finally finished I ended up in the other car instead of the one I had arrived in. On the drive back I listened to inside jokes I was not privy to not being part of the “in-crowd”. I didn’t say much and someone eventually commented that at least I was “no longer a virgin”. I guessed my classmates had just wanted to see what my reaction to the experience would be and to the film’s, um, aesthetics. : )

A few years later on my university’s campus I was able to sit through and observe an entire screening of “Rocky Horror”, now that I knew what to expect… It was okay, better than a “time warp”) back to ‘86… but I still want my dollars back. : )