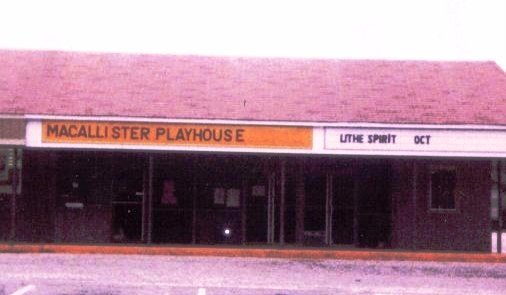 Located in the Brook Plaza Shopping Mall. This was intended to be one of the Jerry Lewis Cinemas, but the chain went bankrupt before it opened. The Director’s Chair Cinema was opened on April 3, 1974 with Richard Dreyfuss in “American Graffiti”. It was closed on February 18, 1982 with “Cinderella”.

It reopened later in 1982 as a live theatre named Macallister Playhouse, which continued until at least 1986..

Although the title suggests an art house, it seems the last few years B action movies played here.

Jan of 1976 they were playing “Snow White"
View link

I was the original manager for the small, single screen theater. I think it only sat about 300 people comfortably (about the size of the Greenwood in Trenton, NJ. It had Cinemamechanica projectors and automation in the booth with 6000 and 9000 foot free wheeling reels. It was owned by the Tommaro Brothers, produce and fruit distributors in Hamilton, NJ, and directed by Tony Tommaro. I do not believe it ever became a money maker. It was originally going to be a part of the Jerry Lewis Theater Chain but that organization went bankrupt.

The theater, in spite of the name, was never intended to become an “art house.”

In June of 1973, the Brookwood Plaza Shopping Center was getting a Jerry Lewis Cinema. By the time this theatre opened, the Lewis Circuit had folded. The 350-seat automated theatre launched April 3, 1974 with “American Graffiti.” The center housing the cinema became the Brook Plaza Shopping Mall. The Director yelled cut closing on February 18, 1982 with “Cinderella.” The theatre was one of two Director Chairs location and this one remained a single screener. It was renamed the Playhouse and staged live plays in 1982.

1980s photo as Macallister Playhouse added credit Bob Rutan‎, who did about a dozen plays there between 1983 and 1986.