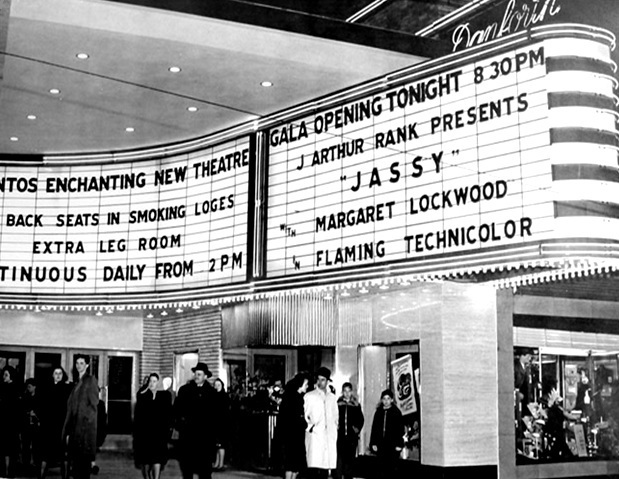 Opened on April 16, 1948, the Odeon Danforth had seating for 852 in the orchestra and 478 in the balcony. It is now a fitness center, though much of the exterior has been preserved.

Yes the old Parkdale was indeed a Famous Players theatre, still there however has been an antique store for years and years. Went there several times as a child. Both the FP Parkdale and the old Odeon were both in a neighbourhood known as Parkdale in Toronto’s west end. Despite the fact that I love thre Rivest list, there are several errors in there regarding Toronto area theatres that I have written to him about but were never corrected. Not sure he’s updating his info anymore.

Yes, that’s the one LM. After the Odeon chain dropped it, it was a Greek cinema called the Rex Danforth…at 635 Danforth Ave at Pape. It’s in the heart of Toronto’s Greektown, so showed Greek movies for years. It’s still there although has been a gym for many years.

Based on the picture posted by Chuck1231, it is evident that the theater was twinned prior to its closure. Screens should be 2.

That picture is of the Odeon HYLAND at Yonge & St Clair. The Odeon DANFORTH was never twinned. It was sold by Odeon before any twinning could be done.

The listing for this should be changed back to single screen then.

The ‘Rex Danforth’ was also a live music venue for a brief time; I saw Devo there in about 1980/81. The mighty Clash also played there I believe.

What of the Pape across the street from it (kitty corner)? I grew up in the neighbourhood and frequented the Pape and the Donlands cinemas, as well as the beloved (and recently demolished) Roxy at Greenwood and Danforth (which was a second run house before becoming a rep under the stewardship of Gary Topp in the later ‘70s).

The Pape was on Pape at 336. I think you are thinking of the Palace.

Just to set the record straight. Gary Topp did run the Roxy at Greenwood & Danforth in the early 70', but I took it over in the mid 70’s and renovated the auditorium: much larger screen, replaced the seats, installed an optical Dolby Stereo sound system. The place I inherited was, to put it charitably, a dump.