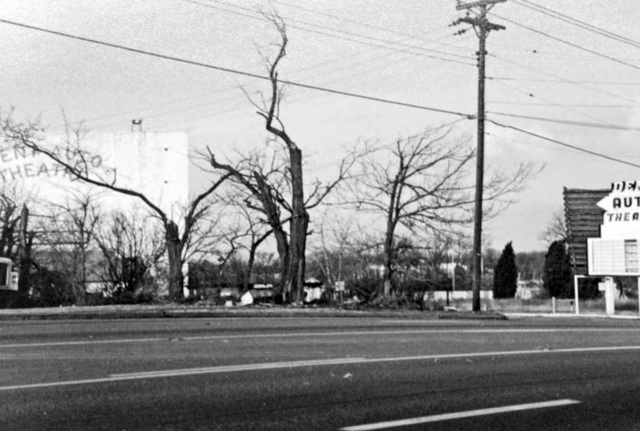 Dent is a section of town on the outskirts of Cincinnati. It was a mostly rural area until “progress” took over. This drive-in was the most popular one in the western part of Hamilton County, Ohio. The Dent Auto Theatre opened July 28, 1949, screening the 1949 adventure “Outpost in Morocco” with George Raft and Marie Windsor. It was opened by Harry Brown, Edward J. Moore and Jerome J. Kunz (dba Auto-In Theatre Co.), who were also operating the Auto-In Theatre. They showed first run movies every night of the week, almost always double features. Anthony Kunz & Sons were the architects and Jack Seyferth was the general contractor for the construction of the new Dent Auto-Theatre. The ozoner could park 800 cars with RCA in-a-car speakers with heaters. Theatres Owner Corp. (TOC) from Cincinnati, OH, was the booking and buying agency in 1952. Starting in 1968, Marshal H. Fine (dba Associated Theatres from Cleveland, OH) took over the operation of the Dent Auto Theatre and the Auto-In. Fine formed the Cincinnati Theatre Co. to operate his Cincinnati theatre interests. In May 1971, Cincinnati Theatre Co. sold the Dent Auto Theatre to Roy B. White (dba (Mid-State Theatres). The sale also included the Auto-In.

It’s 2010 and I still miss the Dent. I drive by the location quite often and every time, I look for the marquis.

I have to agree with the earlier “what were they thinking” comments. The only reason I looked at this when listed as an update was because of the name.

Yeah, the Dent Auto Theatre did exist. Here is the only pic I could find of it: http://www.flickr.com/search/?q=dent+auto+theatre

I presume that is the back of the screen? It almost looks like a full building from this shot. Was there any seating other than the auto? Some theatres had bleachers; others had a little structure that sat a couple of dozen people.

What a great name for a drive-in.Only reason I looked it up too.

No, that is the back of the screen. That’s what you saw as you drove past it on Harrison Ave. It did not have bleachers, but it had a rather large play area for kids with swing sets, slides, etc. All gone now, though.

Wow, what a memory! I remember playing on the swing set with my cousins when our families met there. We had a great time. I can stll smell the popcorn! Those were fun times!

The address number above is incorrect.