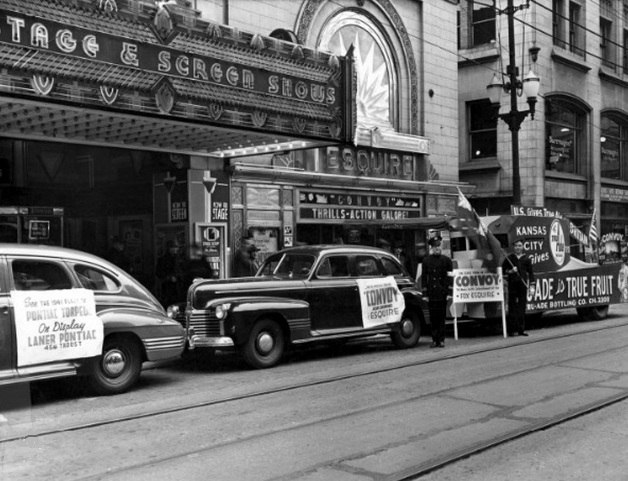 One of the long gone downtown houses of Kansas City. Opened as the 12th Street Theatre on April 22, 1911. It had 650-seats. It was closed on October 5, 1918 and was demolished. A new 12th Street Theatre was built on the same spot. Designed by architect Edgar P. Madorie. It opened on June 20, 1920 with Anita Stewart in “The Yellow Typhoon” It briefly became the Wonderland Theatre in 1932. Then Downtown Theatre from May 6, 1934. On August 18, 1938 it was renamed Esquire Theatre when it was taken over by Fox Midwest Theatres. It was closed on January 8, 1955, but reopened as the Esquire Theatre in September 1956. It was closed on January 28, 1960 with Brigitte Bardot in “..and God Created Woman”, Jane Russell in “The Fuzzy Pink Nightgown” & Dean Martin in “Ten Thousand Bedrooms”. It was demolished in summer of 1960.

Mike. Where was the Capri Theatre you mention? I think I’ve heard of it, but I don’t find in KC listings here.

the Capri was a Durwood Theater near 11th and Broadway and then became the Lyric for many years of performances by the Lyric Opera and the Kansas City Ballet. I really thought that UMKC would take it over. It is a very good theater originally built as a Shriner’s Temple. KMBC TV had their studio in the basement. I hope it can be saved. I did not work at the Plaza but that was a 2nd Cousin of mine that did. If it would have still been owned by the J.C.Nichols Co. it would have never been destroyed -it would have been a great live performance Theater and could could have been easily renovated. I used to go to all the WHB Saturday morning Shows and always sat in the balcony. I saw Goldfinger there. Loved that theater too. Feel free to call me sometime and let’s talk old KC Theaters. 8168133664

Mike. I’ll do that, I promise. When is the best time to call?

Afternoons or in the evenings after 8:00 pm. Enjoy the restoration of the Orpheum, Loew’s State (Palace) the Joy and the Saenger Theaterss (and a few others). I think the Joy is now a night club but at least it was saved. The Orpheum is similar to our Orpheum that was demolished in 1961.

Mike G. I have a good one for you. Last Friday, I was watching TCM and the were running a 1953 movie from 20th Century Fox, Named “Inferno”, staring Robert Ryan, Rhonda Fleming and William Lundigan. The host, Ben Mankowitz, says that although the film was shot in 3D, it was only shown in 3D in L. A. New York, Chicago and London. I was nuts about 3D movies, especially color ones, and made a trip down to the Esquire to see 1st run, because it was advertised in 3D. I’m 99% sure if it hadn’t be 3D, I would have been agitated to say the least. Mankowitz also said most theaters weren’t equipped to show 3D. I’m sure most of the Fox theaters were because when I worked at the Plaza in 1955, they still had their 3D equipment in a storage room in the projection booth. What do you recall?

“Inferno” was also shown in 3-D at the Ambassador Theatre in St. Louis that August. Somebody at TCM needs to do better research.

JAlex. I quite agree. Thanks for the info.

This address was home to two 12th Street Theatres. The original 650-seat venue launched on April 22, 1911 at a cost of $30,000. It went out of business a year later but reopened to much greater success with new management. So popular was the 12th Street Theater that Richards & Flynn decided to construct a larger theater on the same spot at the same time that Pantages was building a vaudeville house nearby. A final October 5, 1919 show at the 12th Street was followed by a salvage sale the next day and the building was razed two weeks late.

In 1932, the theater briefly took on the name of the Wonderland - a theatre that was located in the Rookery Building from 1912 to 1925 a block away - but reverted quickly to the 12th Street Theater until changing its name to the Downtown Theatre. That was a sub-run operation playing deep discount double features continuously. Fox Midwest took on the venue and the neighboring Tower Theatre. On August 18, 1938, it rebranded the Downown as the Esquire Theatre with “Alexander’s Ragtime Band.”

Fox closed the venue on January 8, 1955 as television and suburban houses with free parking took their toll on business. When Fox installed Todd-AO at the Tower in 1956, it reopened the Esquire in September of 1956. The venue bowed out as a grindhouse under the moniker of the New Esquire Theatre on January 28, 1960 with continuous showings of a triple feature with Brigitte Bardot in “… and God Created Woman,” Jane Russell in “The Fuzzy Pink Nightgown,” and Dean Martin in “Ten Thousand Bedrooms.”

The New 12th Street and Pantages (turned Tower) theatres came in to downtown Kansas City together both built in 1920 and they would both exit together 40 years later in 1960. Cleveland Wrecking Company razed both buildings in the summer of 1960 after salvage sales.