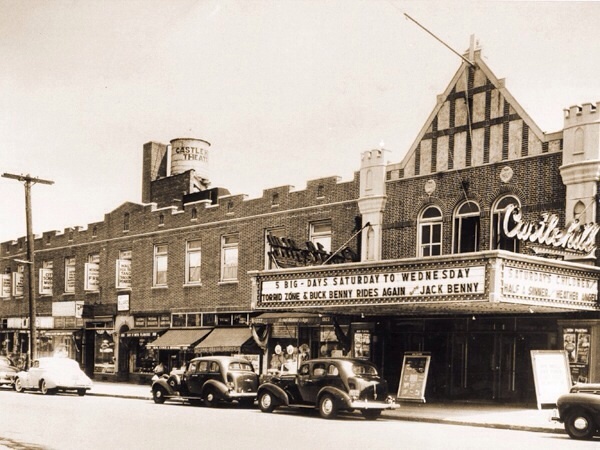 The Castle Hill Theatre was opened in September 1927. It became part of the RKO chain of theatres. It was closed in 1969.

There is a recent photo of this RKO house from Jennifer Lopez’s old neighborhood on forgottenny.com. Check out it and other theaters from the Bronx as they look now. As for the Castle Hill, it is now a church.

Link to this former cinema:
http://www.crossroadstabernacle.com/home.htm

Crossroads is located in the Castle Hill section of the Bronx. The historic building, once the RKO Castle-Hill Theatre, has been transformed into a 1,000-seat, state-of-the-art house of worship. The restoration also includes new administrative facilities, a children’s educational wing, and Studio on the Hill which has already been featured in various trade publications. The project was completed by the renowned Walters-Storyk Design Group and CHBO (Chris Bowman Contractors) Inc.

I’m trying to confirm a promotional appearance at the RKO Castle Hill Theatre, of the Three Stooges, Moe, Larry and Curly Joe DeRita, to promote either “Three Stooges Meet Hercules” (1962), “Three Stooges in Orbit"1962) or "Three Stooges Go Around the World in a Daze” (1963).

I’m a Three Stooges Fan Club member. The Fan Club is trying to document all of their personal appearances. Any help on this, or any other PA’s would be appreciated.
Thanks, Frank Reighter

Yes, yes, YES Bob & Warren & Nonsportsnut! Moe, Larry, and Curly-Joe DeRita WERE there at the RKO Castle Hill Ave. on Sat. Jan. 27th, 1962 in the Bronx at 11:30am!!! How do I know? Because I was a 5 year old sitting in the audience with my 8 year old brother, (whom my mother forced to take along), and together we screamed with laughter and delight among the audience of kids as MOE, (naturally!), smacked LARRY and Curly Joe in his usual “bitch-slap”, (or MOE slap), routine! It was among my first movie theater memories and I cannot recall 8 foot tall Dave Ballard…but I DO recall Moe slapping his sidekicks as he did “IN THE ACT” for over 30 years! Poor Larry, Curly, Curly Joe and then Joe DeRita for taking those REAL slaps. And let’s not forget Shemp, (Moe’s real brother along with Curly!), for taking lots of smacks from Moe as well. Towards the end…on the Mike Douglas Show…Moe got some comeuppance when his WIFE plastered a huge strawberry-cream PIE right in his FACE! LIVE! That was not part “Of the Act”! Check it out on YOUTUBE! Once upon a time in the Bronx with the 3 Stooges and the RKO Castle Hill…would NOT change growing up in that analog era for anything! WORD UP!

Is the caption under the picture about its closing in 1969 100% accurate? I could have sworn I saw several movies there after that date including Young Frankenstein in 1974.

as pellboy asked June 2013 is closing date of 1969 as stated in the intro entirely accurate?