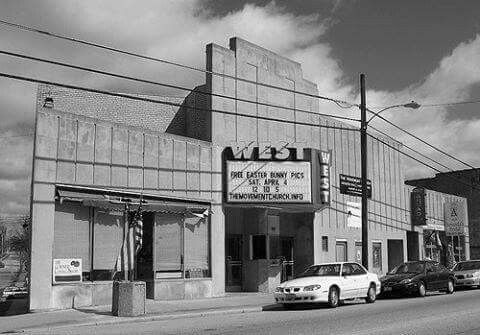 The West Theatre was opened August 22, 1947. It was in operation showing second run movies until it closed in 2008, and briefly became a concert venue. Taken over by a church, they had moved out by 2010, and the basement of the theatre was used for storage. It was reopened in January 2017 as a repertory cinema with some live performances.

The West Theatre opened in August, 1947. The manager was Vincent H. Lauter and the owner was the American Slovene Corporation, a group of residents of the city. The building has a 105 foot frontage on Wooster Road, West and 135 foot deep along 21st Street. The parking lot at the rear of the building holds 70 to 80 cars. The building had a basement that included an arcade of 11 shops/stores, accessable from the front or rear of the building. The theatre was fully airconditioned. This writer worked at the theatre and recalls showing the movie “The Thing” with special green lettering on the marquee. Exact number of seats unknown, but probably around 400. The theatre was in full operation during my last visit (2005)to the city.

The West has been closed for about a year. The church moved on.

I just bought it in June. The basement is converted to inside mini storage.

I loved visiting my grandfather here when I was little. Unfortunately I didn’t realize he was even selling until it was too late. I would have loved to have ran it. I have a lot of fond memories of this place. I would love to see this place restored.

This opened on August 22nd, 1947. Its grand opening ad is in the photo section.

Yes, re-opened and having a blast. Schedule is available on our website; http://thewsttheater.com

The previous post was the manager and he trademarked “the west theater” and that trademark belongs to a company that is closed. The theater shown in the video belongs to me and is now open under westtheaterbarberton.com