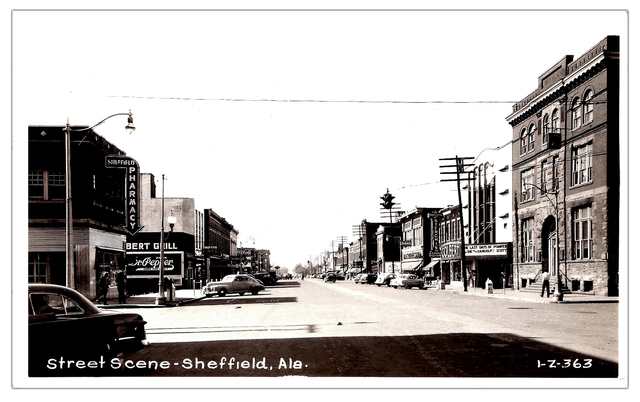 Here is another old photo:
http://tinyurl.com/6p3tgy

In the 60s, there were four indoor theaters in the Muscle Shoals area. Muscle Shoals area consisted of four cities, Florence, Sheffield, Tuscumbia, and the city of Muscle Shoals. In Florence you had the choice of the Shoals and the Norwood (which burnt down in 1968). The Shoals was the most expensive for struggling college students at $1.50 for admission; The Tucsumbian in Tucsumbia was only $1.00. The Colbert (named for the country in which Sheffield, Tuscumbia, and Muscle Shoals reside) was .75 and quite the bargain. In the 60s there was not an indoor movie theater in the actual city of Muscle Shoals. That was to come in the 70s.

In answer to Date of Photo—it is 1954—Yellow Tomahawk with Rory Calhoun & Peggie Castle was released in May 1954..

From the late 1940s / early 1950s a street scene photo from Sheffield that includes a view of the Colbert Theatre.

Looking at the street scene today it appears that the Colbert was torn down. There are cars parked where it previously stood. How sad.