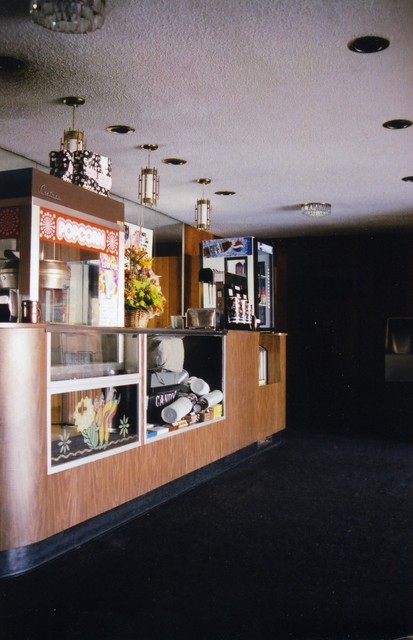 Originally opened as the Playhouse, a legitimate theatre with 650 seats. In 1948 the owners of the towns' Granada Theatre took it over and renamed it Cove Theatre, giving it a new Art Moderne style. It was lovingly restored when it was acquired in the early-1980’s by the Landmark chain.

The Cove Theatre closed in January 2003, and was converted into a furniture store.

Posting to get this theatre back on my “notifications” list….

The lobby was expanded, marble foyer added, and mens and women’s rooms added just inside the (new) front doors. The 1963 photo shows window frames on the second floor, that is actually the wall of the projection booth. After the renovation and addition of the two adjacent storefronts a hallway to an above apartment space was added between the booth and the new marquee.

The Cove’s lobby after the renovation, and until it closed and was destroyed, was wood and mirror paneled and not that appealing. I agree, Chuck, that the original was nicer. The need for a larger concession space was likely the impetus for the “modern” expansion.

They did level it for retail, and made sure that in no way did it resemble the place where a theatre may have once stood. It became a very stark and airy furniture store. The roof (which was barely there anyway!) was replaced with skylights and the floor leveled and done in wood. I have a photograph of it somewhere, not on the computer unfortunately.

I did, however, upload a couple lobby and entrance photographs to my Flickr page, inspired by this discussion: http://www.flickr.com/achangeinscenerymovies

Who ever was behind closing down the La Jolla Cove Theatre should be arrested and in prison. La Jolla will never be the same again!

monika, your comments sound like you worked or ran this theatre. i have some questions for you about the history of the theatre and its closing for a project that i am working on. if you would mind emailing me at , i would be appreciative.

My memories of the Cove date back to 1960 while a student at LJHS. I had smuggled a six-pack in and sat in the back right side (as entering the theater). Burt Lancaster’s bigger than life performance of “Elmer Gantry” was on the big screen and I being of great immaturity sat there thinking “so, this is the religious life? Who needs it” and proceeded to roll my empties down the aisles until I was uncerimoniously asked to leave with my Windansea cohorts.
I graduated in ‘63 and left La Jolla at the end of that summer following my folks to Orange County. No way could I live there on my box boy salary from Mayfair Market on Pearl Street. And the following year a fellow student stopped me on the campus at Fullerton College to take a religious survey. It was a turning point in my life that took me from a life without purpose into a very deep and meaningful religious life, despite the memories of Elmer.
Dave Kirby
LJHS Class of '63

I learned this week of the passing of longtime Cove manager Spencer Wilson. I was lucky to know him. http://www.lajollalight.com/2011/11/26/former-cove-theater-manager-spence-wilson-99-died-on-thanksgiving-day/

I just learned from your comments that Spence had died. He was a good person. I knew him only as a patron – kid matinees and with Mom and Dad when they took me with them. It didn’t matter when, he’d stand at the door and greet you by name. For me, going to the theatre was a treat, primarily because I’d receive a personal greeting. It didn’t matter that everyone received the same greeting. ——– Good times gone but remembered.