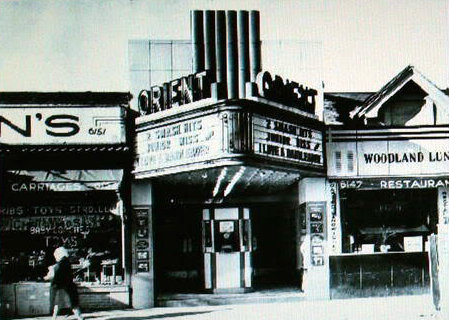 The Orient Theatre originally opened in 1915, designed by architect Charles E. Futcher. In 1919, the firm of Hoffman-Henon Co. was hired to remodel the Orient Theatre. The theatre could seat over 600 and stood on Woodland Avenue near 61st Street.

Around the 1930’s or 1940’s, the theatre received a new Art Moderne facelift, including a new facade, with a triangular marquee, with the name “Orient” above each side. By then it was operated by Warner Bros. Circuit Management Corp. The Orient Theatre closed in 1954.

An electrical supply store is at this address today, but I am unsure whether or not it is housed in the former Orient Theatre or it is a new building. Any additional information on this theatre would be appreciated.

Here is a 1945 photo from the Philadelphia Architects & Buildings site. The photo is from the Irvin Glazer collection:
http://tinyurl.com/yr5sjr

Junior Miss, plus I Married a Bandleader.

Correction, I Love a Bandleader.

25 July 1953 Box Office stated it was to be converted into a farmers market.