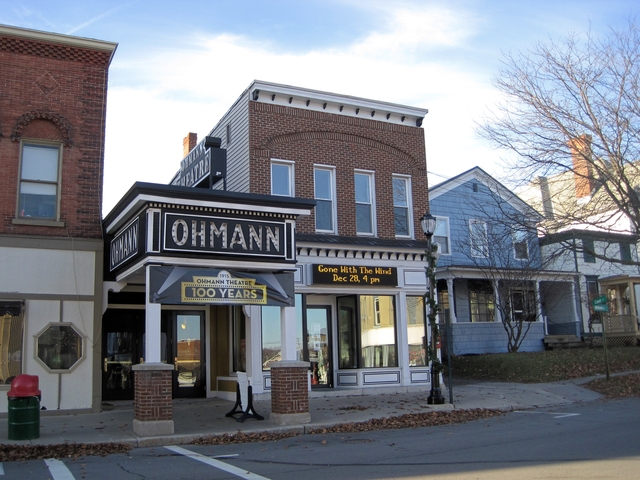 Special thanks to Doris Greco whose kindness in supplying supplemental information has enabled me to submit a much more detailed history of the Ohmann Theatre.

The Ohmann Theatre opened its doors on December 3, 1915. The theatre originally sat 800 on the main floor and 175 in the balcony.

The theatre is a blend of many styles. It’s oak railings exemplify Mission influence while the post supported marquee could be Victorian.

The three biggest drawing films at the Ohmann were, “Gone With The Wind”, “Jaws” (this was amazing because the Ohmann couldn’t get a print until two years after its release} and the world premiere of “The Lady in White”. This was filmed on location in Lyons and some cameos of the Ohmann theatre are shown.

In 1980, the Ohmann family sold the theatre to Dave Reynolds and Thomas Crowley who kept it going until 1993. They closed it after they built their new five-plex (now a six-plex} just seven miles away in the town of Newark. It was sold by them in 2004 for $1.00 plus back taxes to Perkins who almost immediately sold it to Bob Ohmann, the grandson of the original owner.

Bob Ohmann has become a sucessful businessman in North Carolina but hasn’t forgotten Lyons. I understand he’s donated significant monies to Lyons. He is totally funding the rumored $1.4 million restoration of the theatre and movies will remain a part of the “big picture” for the theatre.

Ohmann has hired Chrisanntha Inc. who overseered the historic restoration of Geneva’s, Smith Opera House. I can’t wait to see the finished product.

I first saw the Ohmann theatre about two years after it had been shuttered. The for sale sign was still affixed to the building so naturally I called. The agent (I believe the listing term probably had expired) put me directly in touch with Dave Reynolds — one of two owners. Dave and I talked for maybe 15 minutes at which time I had decided it would have been very difficult for me to turn the Ohmann into a successful operation. The first red flag was, why didn’t they keep the Ohmann operating along with the new five-plex they just built. The second red flag was, why didn’t they build the new complex in Lyons which (I not positive of this, but appearances would indicate it to be fact) has a larger population base than Newark. Finally, Lyons, like many originally manufacturing based towns, looked like it was having difficult times. Memory tells me the asking price for the Ohman in 1994 or 1995, was $37,000.
It was a lot of theatre for a small price. If, however, crowds are small, the last thing you want is a lot of theatre.
To me, the Lyons of today looks better than it did ten years ago so let’s hope the new Ohmann theatre is a success.

I hear the Ohmann Theatre is being remodeled by the origial family. I also hear that the Re-Grand opening will be in 2005.
Is ithe oldest theatre in Western N.Y.?

I visited this theatre in the 1970’s when they had a special showing of “Tillie’s Punctured Romance” with live organ accompaniment. I believe the organ was an electronic model with a console built to resemble that of a real theatre organ, and it sounded good! You would have sworn it was an actual pipe organ. I remember the theatre still had it’s original marquee, and the oak doors going to the auditorium had oval glass panels in them. I glad to hear it will be opening again. I’ll have to visit when I go home for the summer.

New stage sound with a special mixing board –

Here is the description of the new Ohmann Theatre that was published in the December 25, 1915, issue of The Moving Picture World:

In Lyons, N. Y., the new Ohmann moving picture theater was opened recently. This building was built for Ohmann Brothers, of Lyons, at a cost of $20,000. The new house is on the ground floor, located in the rear of the Wayne Press building in William street. The building is 80 by 60 and 35 feet high, and is reached from the street by a corridor 75 feet in depth with a canopy over the walk. The construction is of steel framework, covered with concrete and hollow tile. The floors are concrete and set with opera chairs. The main floor has a seating capacity of 800, and the balcony seats 175 more. The interior finish is of buff and oak.“

The July 10, 1915 issue of The American Contractor said that additional contracts had been awarded for B. C. Ohmann’s new theater under construction at Lyons. The project had been designed by Syracuse architects E. A. Howard & Son.