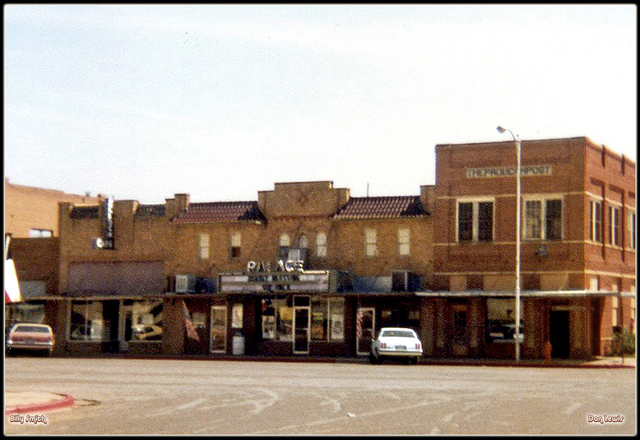 Opened as the New Theatre on November 7, 1928 with Dolores del Rio in “Ramona”. This cute little theatre on the courthouse square is in pretty shabby shape. The facade is low and wide with a tile roof and an orange brick shamrock design in the center. The marquee is quite simple, and the ‘P’ is missing. The windows in the upper story are boarded over. The outdoor booth is now inside a shop window for what seems to be a used clothing place.

There was a history of the theater posted (an article from a 1970’s newspaper). I wish I had just photographed it, but the gist was that it had been a very busy theater up to the late-1950’s, but closed at some point. It was then rescued by a couple in the early-1970’s who invested a lot of money in it, but got into trouble with distributors because they refused to carry ‘R’ rated movies.

I WOULD LOVE TO KNOW MORE ABOUT THE THEATRE ANYONE HAVE ANY INFO?

A photo taken around the early to mid 1980s of the Palace Theater in Paducah showing Wes Cravens “Deadly Blessing” starring Sharon Stone.

You live or die by your bookings.If one doesn’t want to run rated R movies more power to them,but the community needed to support them on the G and PG movies.Thank goodness there wasn’t that stupid PG -13 rating then.

Tsloews you gotta go back to the UNICORN THEATRE site…

Hmmm…..you’ve gotten some misinformation. I grew-up in Paducah and went to this theater many times. They did not close because of refusing to show R-rated movies……..there was a bad fire that totally destroyed the inside of the building.

This Simpson & Nelson theatre was credited as being run by H.B Leathers and built in 1928. Leathers ran the Palace Theatre in downtown Paducah which was them run by his wife Johnnie Jones-Leathers after his death. The theater launched as the New Theatre on November 7, 1928 with Dolores Del Rio in “Ramona.” It had 908 seats – 608 on the main floor. , Lillie McCain chose the Paducah Palace which was its official name until being called the Palace Theatre.

A better sound-on-film installation moved the old Photo-Talker disc equipment to the Zana as the town moved to two theaters capable of showing talkies. Johnnie Leathers ran the Palace until August 27, 1965. New operators relaunched on September 17, 1965 and the theatre ran into the home video age. After a long period of closure, the marquee was refurbished along with the building’s facade as part of a beautification effort in 2013. in the Palace was trans- ferred over to the Zana, operated as a second house by these men .