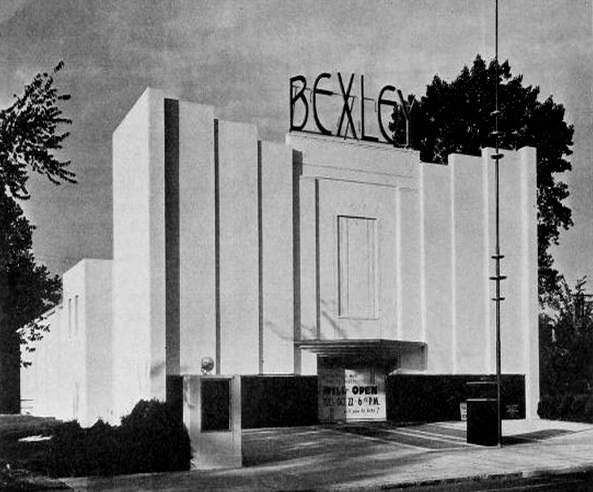 The Bexley Theater was one of the first twin-screen theaters ever built when it opened in 1935. At the time, it used a unique projection system that split the projector beam into two identical images so that the same film could be shown simultaneously in both auditoriums.

In 1954, the Bexley Theater became part of the Art Theater Guild chain. By the 1960’s, the split-projector system had long been abandoned, and the two screens always showed separate films. But bookings were often shared with the chain’s other Columbus house, the World Theater on North High Street next to Ohio State University.

When I knew it in the late-1960’s and early-1970’s, the Bexley Theater showed primarily foreign and art films, but some bookings tended to be on the racy side—for instance, “I Am Curious (Yellow”. Occasionally they showed revivals — I recall attending several evenings of a Charlie Chaplin film festival there in the early-1970’s.

After years of controversy, the Bexley Theater was demolished in 1997 to make way for a McDonald’s fast-food restaurant. The McDonald’s did not last long, and was in turn replaced by the Chipotle Mexican restaurant that stands on the site today.

The dual projection system was still in use in 1955, when Louis & Maury Sher took over the ownership, with Robert Little as manager. Original screen size was 9' x 12', but the screens were expanded to 15' by 20'. At that time, it was not equipped for wide screen/Cinemascope. Popcorn and candy was not sold, but free coffee and soft drinks were available in the lobby. Children under 18 were not admitted, even though adult films were not shown at that time.

MovieMgr, I was a student at Capital University during your management years at the Bexley. You had some good movies running there then!

Was there any remnant of the mirror system there while you were there?

Hi Mark, No, when I took over we had two projection booths and one projectionist. I’m not sure when the mirror configuration ended but it was due to sulfur in the well water used for evaporative cooling, it disorted the mirrors and thus the image projected. Of couse I knew Lou Sher and Bob Little well. I wonder if you knew any of the capital students who worked for me. I’m at

Do you happen to remember when you showed the Charlie Chaplin festival? That was my first exposure to Modern Times, Monsieur Verdoux, A King In New York, and The Great Dictator.

I would think the Chaplin festival was in the mid-‘70s. After Chaplin’s special Oscar in 1972, there was a great deal of interest, and Chaplin, who of course retained control of his movies, released his films as a series. I recall seeing a few of them at the World, the Bexley’s sister theater on the OSU campus, circa 1975.

I grew up just outside Bexley in the Berwick area, and the theater was nearing the height of its notoriety as I was entering my high school years in 1969. However, it tried a period of mainstream second-run in 1970, not long after Jerry Knight’s Drexel, up the road, went from second-run to a first-run house for prestige pictures. In 1970 and 1971 I saw sub-runs of BUTCH CASSIDY AND THE SUNDANCE KID and LITTLE BIG MAN, respectively, at the Bexley.

I grew up in EastMoor and moved away in 1967. Prior to that I went to the Bexley fairly often ( as often as a movie obsessed 11 year old can be). The first time I went there was with my parents to see The Mouse That Roared. I remember being disappointed because the ( spoiler alert) the mouse didn’t appear until the very end. Other films I saw there were Jacques Cousteau’s World Without Sun, The Czech film The Shameless Old Lady, The World of Harold Lloyd ( which had its “world premiere” there), The Umbrellas of Cherbourg and on a Sunday night: Jules and Jim. On Sunday and Monday evenings they had the Janus Film series which were basically an ongoing selection of what are now mostly Criterion Collection DVDs . I loved the Bexley, I thought it was in the best sense of the word an “Adult” theatre and when I moved away I was sad at its decline.

the late 90’s seemed to be a big transition time in Bexley with the demo of this Cinema and then in 2000, the Kahiki Supper Club on E Broad St. – now a Walgreen’s.

Here is a link to an article about the Bexley Theatre in the November 16, 1935, issue of Boxoffice

I worked at the Bexley in ‘74 and the World that same year and into the next. At that point I did ticket and concessions and occasional help with janitorial work. One time the popcorn machine was broken at the Bexley and one of the perverts (we didn’t have patrons we had perverts) asked to buy a large tub of popcorn. We explained that the machine was broken and he wanted to know if he could just by the tub. As one of the nastier jobs as janitor was cleaning up all the dumped popcorn off the sticky floors in the theater. This was after I graduated from Cap.