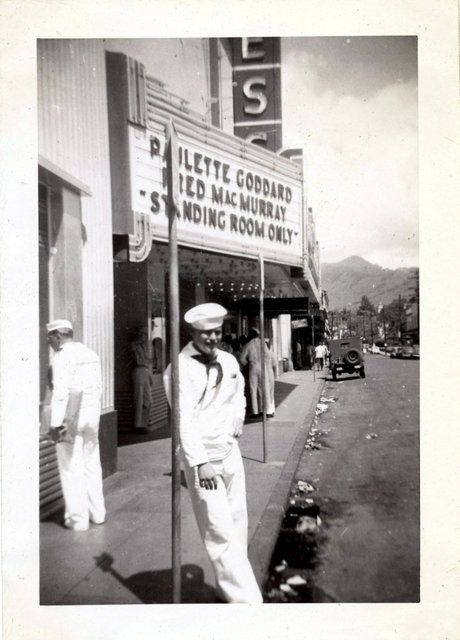 The Princess Theatre opened on November 8, 1922 seating 1,600. It was located on Fort Street just off the Pali Highway. The Princess Theatre ran first run fare until a remodel in 1958. It was re-done to accommodate three-strip Cinerama which ran from 7/22/58 through 5/24/58. It had a curved screen that measured 62 feet by 23 feet. After the three-strip, it reverted back to regular first run films.

In 1962 Cinerama returned to Honolulu, first in the three-strip process then in the 70mm format to the Cinerama Theatre (Pawaa Theatre). The Princess Theatre struggled along until 1968 when it closed and a short time later was demolished.

In 1963, the Princess was part of Consolidated Amusements out of Honolulu. I won’t try and spell some of these more than once, so here are the Consolidated theaters as listed in the 1963 motion picture almanac:

The Princess (not the Palace) was built on the site of the Orpheum theatre.

It was designed in the neo-classical Beaux Arts style and opened on November 8, 1922 (not 1928) with its own full orchestra. The theatre was built by an independent operator but became part of the Consolidated Amusement Company chain within a couple years. In 1939 it was “modernized” both inside and out; only the elaborate coffered ceiling survived intact.

In addition to films, the theatre also presented stage shows and local symphony orchestra concerts. During World War II, like all Honolulu theatres, it was filled to capacity with servicemen.

The Princess had a 4/22 Robert Morton pipe organ, which I helped remove shortly before the theatre was demolished in 1969 (due to municipal urban renewal) and move to the nearby Hawaii Theatre, where it was eventually reinstalled and is still played on occasion.

By the way, when Cinerama moved from the Princess to the new Cinerama Theatre (former Pawaa), they did show three strip films there — The Wonderful World of the Brothers Grimm and How the West Was Won.

You’re correct Vito, and when the Cinerama Theatre was converted to a retail store, the projectors were removed by Pacific Theatres (parent company of Consolidated) and taken to Los Angeles to the Cinerama Dome for re-use.