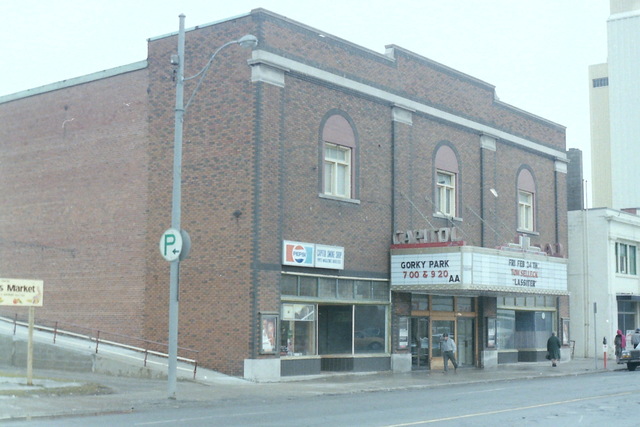 The Capitol Theatre opened January 1928 and and had an original seating capacity of 1,360. It was designed in an Atmospheric style by architect G.J. Mace.

Closed in 1985 it was demolished by the city administration in 1991.

An article about the failed restoration of the Capitol is at:
http://www.cornwall-lacac.on.ca/Capitol.html

The Capitol Theatre was a ‘sister’ theatre to the Runnymede Theatre, Toronto.

The change in policy at the Capitol to first-run movies in 1983-84 led directly to the demise of the Palace Theatres which Canadian Odeon could not find profitable when competing against a non-profit theatre.

The Capitol Theatre in Cornwall is one of my favourite theatres, built in 1928 by the Palace Amusement Company, a Famous Players partnership situation. Clarence Markell was the spark behind this building and the Palace Theatre in Cornwall, Ontario — and during the twenties and thirties both these theatres did very well. Clarence Markell was extremely GOOD theatre operator!! During the first year or two of the Capitol Theatre’s operation — the Palace Theatre was kept closed, but later was re-opened and much later became the number one house when remodelled completely about `1949. Business was so good in Cornwall, that the Markells and the Whithams seriously considered building a third theatre in Cornwall, but it never happened!! The Capitol Theatre had a wooden floor and I remember hearing the crowds move on that wooden floor (it sounded very loud almost like a herd of elephants moving).