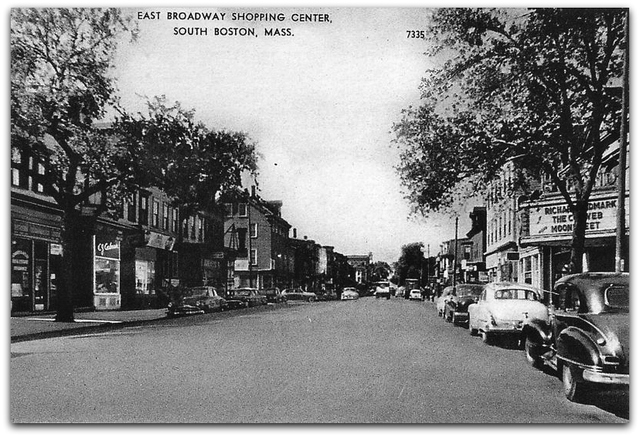 Located in South Boston, the Strand Theatre was opened in 1930. It was destroyed by fire in 1958.

A Google search shows a Brooks Pharmacy at that address. It’s probably in its own new building rather than the old theatre building, but I won’t know for sure until I take a trip out there.

I believe that this theater was razed several years ago. When I was a kid in the 50’s I visited the Strand often…25 cents admission for a double feature. The matinees were bedlam with kids running all over the place…the only movie dialogue you could hear without straining were the sing-along, bouncing-ball sing-along shorts.

I went to this address tonight. The Brooks Pharmacy is definitely in its own purpose-built structure and not in anything that looks like an old theatre. The status should be changed to “Closed/Demolished”.

The Strand in South Boston was one of the three theatres owned by Phil Smith, which were the beginnings of Smith’s Theatrical Enterprises. The Strand was managed by Jim Cronin, “a proper Bostonian Irishman who lectured anyone who disturbed the quiet of the theater.” Quoted Dick Smith, “there were no candy wrappers on his floors”, and “no wise kids”. Phil Smith also owned the Broadway in South Boston and the Strand in Ipswich. These three were said to have carried the Smith family through the depression and formed the beginning of what would later become General Cinema.

I used to go to South Boston occasionally in the 1960s and there was no Strand Theatre there then (from 1961 on). Later, someone told me that a furniture store went into the Strand building. The MGM Theatre Photograph and Report form has an exterior photo taken in April 1941. The building has at least two floors. The marquee is a 2-sided triangle with a big “S” at the apex and 3 rows of black letters on a white background. The films playing are “Philadelphia Story” and “Her First Romance”. The address is 710 Broadway. The Report states that the Strand has been a MGM customer for over 10 years, That the condition is Good; and that the house has 1498 seats. Competing theatres in South Boston in 1941 were the Broadway Theatre and the little Imperial Th. over on I Street.

I used to attend the Strand Theater matinees in Boston on Saturdays as a boy, though at least once I ventured as far as the Broadway Theater a little farther up Broadway. When I left in 1953 I believe that both theater was still up and running. I’ll never forget the Strand because I once got an elbow in the eye while being jostled in the ticket line. The elbow broke a sty on my eye and I had to go home, thus missing out on the double feature. I still pine for those two missed films. Ha. Ha.

I only went to the Strand a couple of times in my youth. Kids from my end of town [the Old Colony projects] went to the Broadway, about a mile down on West Broadway. The Strand was torn down, I believe, in the late 50s.

From the 1940s a photo postcard view of the Strand in South Boston.

I grew up in Southie. The Strand burned down the night before I was planning on seeing “The Blob.” I was 10 years old. It would have been 1958.

Don Lewis. The postcard shows Richard Widmark in “the Cobweb.” That movie came out in 1955. Thus, the postcard is from 1955.