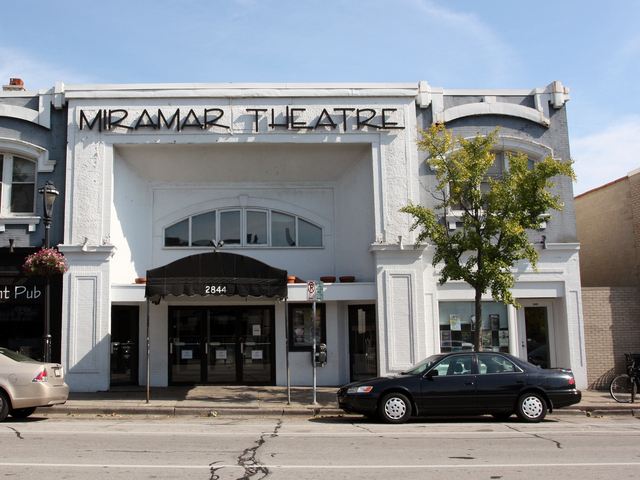 The Miramar Theatre opened around 1913 as the Miramar Movie House. The name was eventually changed to the Oakland Theatre. In 1954 this theatre switched to live performances and changed names many times. At one point this theatre had become a church and now its back to being a theatre again.

In 1954 the Oakland became the Fred Miller Theater and it was converted to a theater in the round. Its first presentation was Sabrina Fair with Jeffrey Lynn as its star.

In the Larry Widen and Judi Anderson book “Milwaukee Movie Palaces” (1986) the seating capacity of the Miramar/Oakland is given as 800 and the architect is named as George Ehlers.

The Operating years are correct as given above.

The name MIRAMAR is Spanish for ‘View of the sea’ and since there is no sea within view of the MIRAMAR theatre (it faces away from Lake Michigan, about ten blocks east of it) one can only speculate if the original owner had been to the communities named such in Florida or California, or the original in Italy. Nonetheless, the history given on the theatre’s current we site may vanish, so I take the liberty of reproducing it here:

“ PROVENANCE
The Miramar Theatre was built in 1913 as the Miramar movie house. Its name was eventually changed to the Oakland Theatre, and motion pictures continued to be shown through the late forties. In July of 1954, Drama Incorporated, under the chairmanship of Fred Miller, head of the Miller Brewing Company, entered into an agreement to rent the Oakland Theatre for what would eventually become The Milwaukee Repertory Theater. On September 16th 1954, The Milwaukee Journal announced that the name selected through a "name-the-theatre” contest was the “Milwaukee City Circle”. The new name however was never used. Tragically, Fred Miller was killed in a small plane crash in December of that year, and the board of directors for Drama Inc. voted to name the theatre The Frederick C. Miller Memorial Theatre. The Fred Miller Theatre opened its doors January 25th, 1955.

Throughout the better portion of the 1970’s the theatre was the J. Pellman Theatre, a star vehicle venue for musicals and other productions featuring stars such as Mickey Rooney, Rita Moreno, John Astin, Patty Duke, Bernadette Peters, Robet Horton, and Guy Madison, as well as the site for boxing and wrestling matches!

In the late 1970’s, until 1981, the theatre became the Metropole Nightclub, featuring numerous rock acts. The Eastbrook Church purchased the building in 1983, only two days away from its scheduled demolition, and considerably repaired and remodeled what had become exceedingly run-down. In 1995, the congregation of Eastbrook Church had grown to such an extent that it became necessary to move to larger quarters. Even though attempts were made to sell the property to some smaller religious organizations, for the most part, the theatre stood empty for three years.

The MIRAMAR has dire financial straits currently as disclosed in their news report here on CT at: http://cinematreasures.org/news/12937_0_1_0_C/
Perhaps an ‘angel’ will appear before the May deadline.

It should be noted that this theatre was never a movie palace, and that the interior that existed at opening no longer exists and today contains virtually no decor. It cannot be claimed as an architectural icon, but it does have local historical and usefulness merits.

I would say they got past that bump in the road as here it is, 7 years later and its still open.