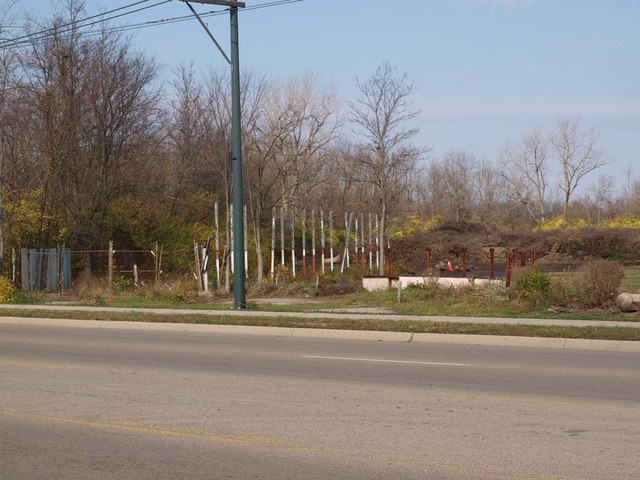 Sadly it closed at the end of the season in 1989 as west down fell apart. Today nothing remains but the concession stand.

The second concession stand burned down years ago. Screen two remains and screen 1 is used now at the Levin’s Dixie Drive-In, which is now a twin.

My first “second” job I ever had in Dayton in 1963 was in the concession stand of the north screen, the newest one. Later, I worked as Assistant Manager of the Dayton West, also owned by the same brothers down the street. Incidentally, the Levin brothers lived in a large house located next door to the east of the Sherwood Twin.

The operator was listed as Lewis Levin in the 1963 motion picture almanac. Car capacity was 350. The almanac lists the operator of both the Dayton East and Dayton West Drive-Ins as Tri-State Theaters. This may have been the Levin Brothers' company at that time.

There is an old sign at near the western edge of the property, actually in the parking lot of whatever business is next door. It looks a lot like a drive-in marquee, but it isn’t exactly on the drive-in lot. Is this sign actually the Sherwood’s old marquee?

As best I believe that the original sign for the Sherwood was either painted or mounted on the front side of the screen nearest W. Third Street. The sign shown in the picture actually belonged to a large restaurant just on the west side of the movie theater.

As a kid this is where I spent a lot of Friday nights.This was the place to meet up with friends and have fun.No matter how many times you went to the concession stand it was always an adventure.We need places like this to take our kids so they can experience what we did as kids.

Does anyone know the name of the trailer park / court that was located just to the east side of the Sherwood Twin Theater, I lived there for a short time in the 1950’s, but not sure when it closed. I remember watching the fireworks show that the theater provided… it was a long time ago.

Actually Sometime Between The 1970s And 1980s, A 3rd Screen Was Added. According To The April 7th, 1984 Journal Herald, The Sherwood Drive-In Had 3 Screens At The Time.