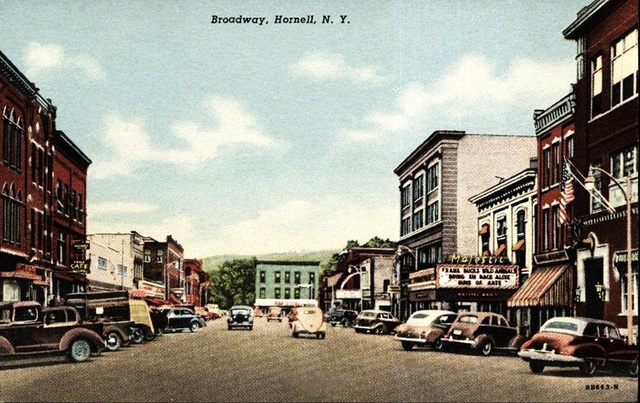 The Majestic Theater was built in the early-1900’s by the Peters family. It was located at 5254 Broadway (old address) across the street from the Shattuck Opera House. It opened as a silent movie and vaudeville theater. The Majestic Theater was operated by Warner Bros. Circuit Management Inc. in the early-1930’s until 1940. It was then takewn over by the Dipson Circuit. It became a second run theater before closing in the 1960’s.

There was a Majestic Theatre in Erie PA, but can’t find an address for it. If anyone can help, it would be appreciate. Thanks.

It was A warner Brothers Theatre in the Thirties.Nov.8.1934 has JACK BENNY in"TRANSATLANTIC MERRY-Go-ROUND".Balcony was Thirty cents and the good seats were forty cents.Jan 5 1933 had the first TALKING MOVIE filmed in AFRICA called “CONGORILLA”.Playing at the Majestic.

The April 3, 1940, issue of The Film Daily reported that Warner Brothers had dropped the Majestic Theatre in Hornell when their lease ran out, and operation of the house had reverted to the local owners, Mr. and Mrs. Fred F. Peters. The chain had leased the Steuben and Strand Theatres in Hornell in 1939, according to the April 10 issue of the Daily. The July 7, 1942, issue said that the Majestic had been acquired by Nikitas Dipson.

Scroll down this web page to find a photo of the Majestic, and another of an early storefront theater called the Lyric. Both houses were in operation in 1916.