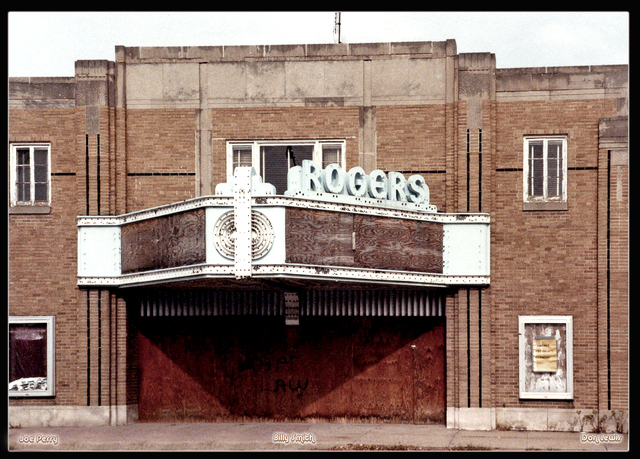 The Rogers Theatre opened December 3, 1937 on E. Wood Street. The theatre was designed in Art Moderne style, and sat around 900. The Rogers Theatre was closed on August 30, 1984 with Prince in “Purple Rain”. It sat vacant until October 1995 when it was badly damaged by a fire. It was demolished in Febreuary 1997.

I think the owner of the theater tried in the mid 90’s to turn it into a liquor store or warehouse but was denied by the city. Shortly after being denied I think the theater had a fire. I’m sure the city of Decatur has ordered this theater to be torn down by now. I am just guessing on all of this and I could be wrong.

The Rogers Theatre was demolished a few years ago.

A sad look at the closed, abandoned, and now demolished Rogers Theater in Decatur. And an enlarged view here.

Sad looking photos,porno at the RODGERS.

Once that X rated movie played there i am sure locals had no reason to support it.

Yes, the Rogers theater was bought by person or persons unknown in order to turn it not into a liquor store, but into a night club. The major rumor that circulated around town at the time of the Roger’s fire incident was that it was burnt down in order to get the insurance money. My personal impression on the arson has always been that (again, my personal impression) was that the firesetter really, really, REALLY liked Club 21 too much for another nightclub, located just a few blocks away, to potentially take away business from Club 21.

The building sat vacant for almost 11 years, until a new owner purchased it in Summer of 1995. His stated intention was to convert the property into a package-liquor store and warehouse, but he failed to win a liquor license in the city of Decatur’s lottery. The building caught on fire in October of that same year.

After wranglings over whether the demolition cost would be paid by the building owner or the city, the Rogers was finally torn down in February of 1997.