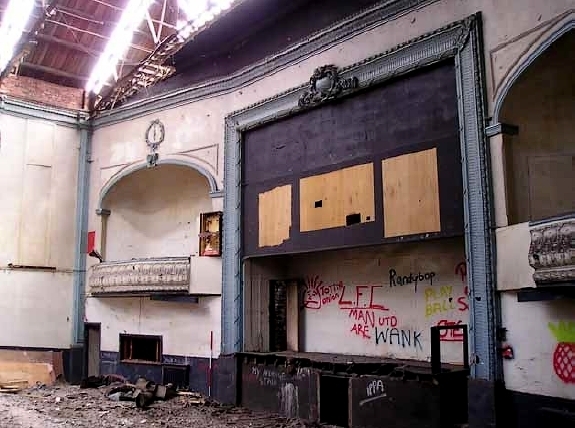 This is an immediately pre-demolition view of the proscenium and flanking galleries, which raises two observations.

In the days of silent films, having musicians in one/other/both of the galleries would have been an acoustically optimal arrangement for the audience. However, how did the musicians coordinate with the action in the film, since they couldn’t see the screen?

A few feet of gallery-front decoration is missing from both galleries at the ends nearer the screen. This isn’t likely to be decay: the edges are too clean; and the work too symmetrical. It raises the possibility that a CinemaScope screen was accommodated by the common solution of erecting a box-like, and wider, proscenium in front of the original. It’s tempting to see those cut gallery-decoration edges aligning with the part of the ceiling that has stayed in place over the proscenium; but that’s probably coincidence.