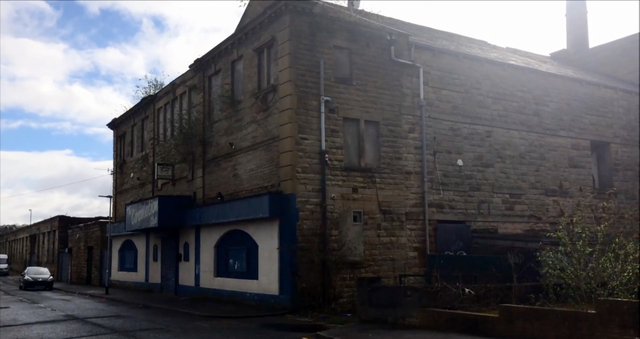 A side view of the building.

The tagged-on front contrasts with the auditorium (an original mill building) behind it (see the thickness of the mill wall in that upper opening in the flank).

There is a blue board blocking a side exit, which is at the rear semi-cross-aisle of the stalls. ( The aisle didn’t ‘cross’ the back of the stalls because the projection room sat in the middle.)

I’m speculating: perhaps the original configuration was that the 1910 cinema was at the ground level with the (roller) skating rink on an upper floor. The skating business/fad passed so the cinema was knocked through into the upper floors to facilitate adding a balcony. Adding the extension on the front released extra space in the original building for auditorium use.