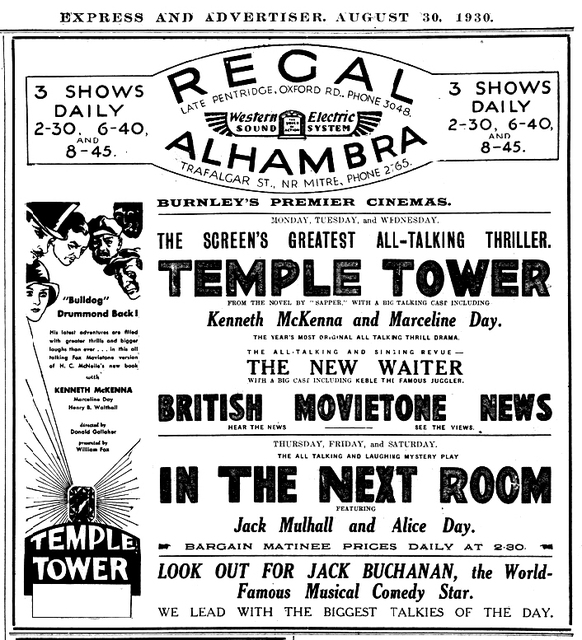 The Electrocord sound system, installed in May 1929 was removed and replaced with Western Electric by August 1930. It lasted barely 15 months; it must have been bad. The new WE system branding was used in the cinema’s advertisements in the local papers and the management had even rebranded the cinema as the Regal. It reverted to Pentridge later.

This advert confirm the above and shows that The Alhambra had been taken over by the same company and kitted out with WE (it had been on silent until August 1930).

It was Standard Cinema Properties Ltd of Birmingham who ran the cinema under the Regal name, starting around August 1930.

By October 1933, local paper adverts for the cinema had reverted to using the Pentridge name.

In the Kinematograph Year Book 1935 the owners are New Empire (Burnley) Ltd, based at the Empire cinema on St James' Street. It was reported in the local newspaper on 15 November 1933 that New Empire (Burnley) had acquired the Pentridge (by that name), along with 4 other cinemas from Mr J Bradley who was suffering ill-health. The company had also tried to acquire the Savoy, but the owners preferred to lease it to a Liverpool operator, Harry Buxton.