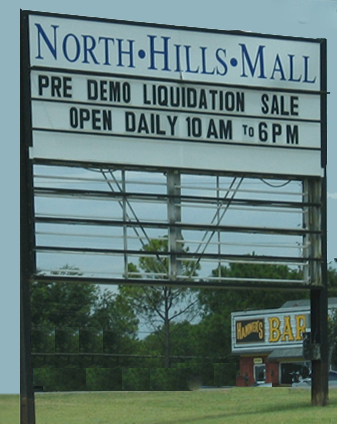 The GCC North Hills VII theatre closed December 17, 1998 as the mall began a quick descent into greyfield status, a term akin to a dead mall. The General Cinema attraction sign was repurposed toward the end of the mall’s life. The theater sat in mint condition for the final six years of the mall’s life right to the last store’s closure in 2004. And then in 2005, you could go in and buy the fixtures from the cinema or anywhere else in the mall as the final owners tried to get any dime they could out of the property which, sadly, they abandoned without demolishing. The wrecking ball was city-ordered in 2007 and the picked apart North Hills Mall was finally a distant memory. As a building, the original North Richland Hills General Cinema just up the road at Richland Plaza opened in 1964 outsurvived the theater that replaced it still standing in the mid 2010s.