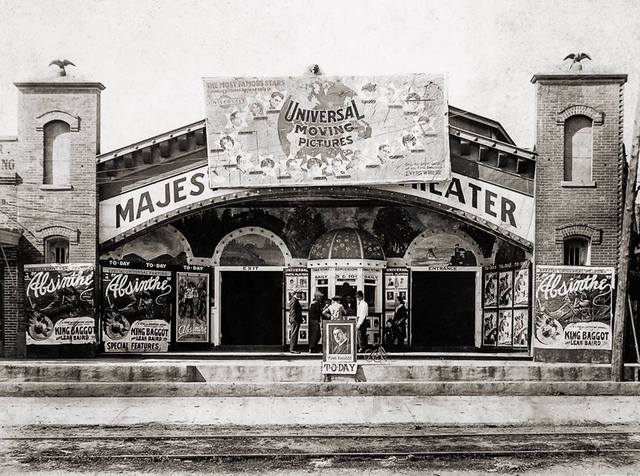 Copy courtesy of Traces of Texas facebook page. Traces of Texas reader Jay Chatmas was nice enough to submit this INCREDIBLE 1914 photo of the Majestic Theater in Marlin, which was owned by his grandfather. Says Jay: “my grandfather was JC Chatmas, Sr, and he immigrated to Marlin around 1900. He was a pioneer in the theater business in Marlin, where he owned and operated three different movie theaters and a drive-in theater over many years. My father, JC Chatmas, Jr, was born in Marlin, as was I. This is an original photo showing the Majestic Theater in 1914.

Prior to the time of this photo, in 1912, J.C. Chatmas, Sr, bought an interest in the Majestic Theater, located on Railroad St (currently Heritage Row) in Marlin. Soon thereafter he became the sole owner of the business. The Majestic Theater, as seen in this 1914 photo, was an air-dome type theater. At night, weather permitting, the roof could be rolled back to show the stars – a nice way of air conditioning, too. During this period, movies were still silent “flickers” and over-acting was at its best. In 1925 the old Majestic building was torn down, a new fireproof building was erected by Chatmas, and the Palace Theatre was born. Chatmas operated the Palace continuously on this site until his death in 1966."

What a great photo and an outstanding slice of small town Texas history. People getting tickets for the show, just like on any other day, and it’s razor sharp. Thank you, Jay! Wonderful!