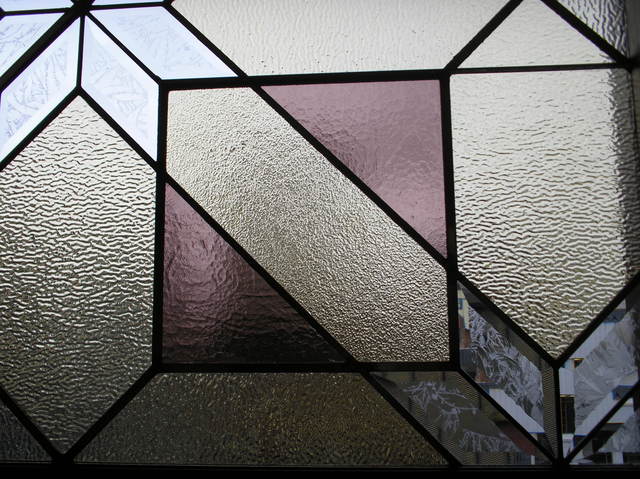 Detail of the types of glass used in the facade window over the marquee. This window was a replica, based on photographs. It had been replaced by a wall of glass blocks in the late 1940s when the tall ticket lobby was floored-in to join the two office wings. Hammered lavender glass, hammered amber glass, and glue-chipped beveled glass pieces were utilized in the creation of this replica window. Whereas it once provided filtered natural light to the ticket lobby’s soaring ceiling and the Maynard Dixon mural over the original entrance doors, today it provides that filtered light to two levels of hallways connecting classrooms of the school which now uses the upper levels of the Fox Oakland Office Building. The aforementioned mural (on canvas) had been hidden by a wall in the 40s remodel, but was discovered in either 1984 or ‘85, peeled from the wall during the time the Charles Dickens Christmas Faire was using the theater, and stolen. According to an individual once associated with the Faire, the pilfered mural was somehow used as part of a cocaine deal.