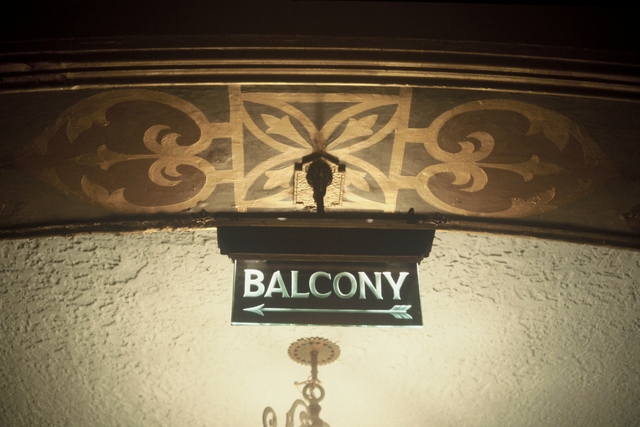 At each end of the Mezzanine hang signs pointing the way to the Balcony. They are not original to the theatre, though they appear so, by design. Power had been run to these locations to illuminate backlit attraction boards advertising the movies shown in the two theaters created from the Balcony when the Golden State was triplexed in 1975. With the mid-2000s un-plexing of the theater, these attraction board light boxes were removed. I had in my collection a pair of restroom signs saved from the Harding Theatre in San Francisco (also designed by Reid Bros.). The Reids had used the same restroom sign fixture supplier in both theaters, so these fixtures matched those already existing for the Golden State’s restrooms. I produced new etched glass “Balcony” signs to replace the “Men” and “Ladies” signs, and the fixtures were rewired and installed. The Golden State houses a number of items saved from other theaters, which happened to match items which were missing, including one stained glass exit sign from the Peninsula Theatre, Burlingame, and three fire hose racks from the Amazon Theatre, San Francisco. And lets not forget the Wurlitzer organ, originally from San Francisco’s Parkside Theatre.