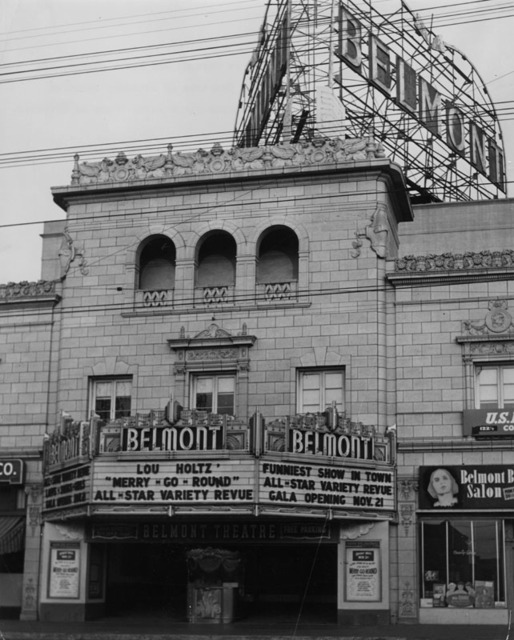 Hi everybody, I must say that I have wonderful memories of this theater. To the left of the photo is a bowling alley biz that was downstairs. My Dad had a printing and lithograph business to the left of that with one of the really big printing presses that had a numbering system and one of my Dad’s customers was Security Pacific Bank. That bank closed in the 80s as I recall. I had really fond memories of going to the theater. As a child I was so impressed with the inside of the theater…it was grand. I thought the owners were royalty, maybe a King or a Queen. I found out later that it was Hollywood royalty that owned the theater, Fox! Later in life I found my self working at Fox Studios and for the time I was there I really enjoyed it and walked the lot for lunch l@@king at some the sets and where they had filmed some of the very films I had seen at the Belmont. Dad made friends with the theater’s manager, Mr. Landon. It was the actor’s father, Michael Landon of Bonaza, who we all got to know. His Dad sent us saltwater taffy from Atlantic City when he went on vacation! JoAnn Carol Berryman

Correction, Michael Landon of Bonanza! Sat with Dad in the living room on Sunday nights watching Bonanza. Great days then and Great days to come.